Jesus offered eternal truths through his famous parables, those electrifying little stories that slammed into people's hearts and caused them to re-examine their lives. 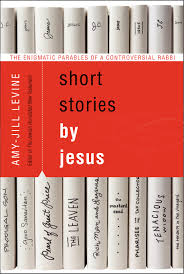 Today, however, it's hard to hear those parables in the same way that Jesus' First Century Jewish listeners would have heard them. Christian preachers and teachers have domesticated and, thus, sucked much of the life out of the parables, making them gentle little ethics lessons with obvious conclusions.

What's needed is someone who can take us back to the time when Jesus first spoke of the Prodigal Son, the Mustard Seed, the Lost Coin and many others matters so that we can grasp how shocking and transformative some of his stories were.

Thank God for Amy-Jill Levine, who has accomplished exactly that in her new book, Short Stories by Jesus: The Enigmatic Parables of a Controversial Rabbi.

If you are a preacher or even if you listen to preachers who base sermons on the parables, do not preach again or listen again until you have read this book. It will open your eyes as it clears the air of sometimes well-meaning but often misguided interpretations of these short stories by Jesus -- interpretations that contained buried within them an anti-Jewish bias that sometimes borders on open bigotry.

"Religion," writes Levine, a member of an Orthodox Jewish synagogue who teaches New Testament at Vanderbilt, "has been defined as designed to comfort the afflicted and to afflict the comfortable. We do well to think of the parables of Jesus doing the afflicting. Therefore, if we hear a parable and think, 'I really like that' or, worse, fail to take any challenge, we are not listening well enough."

Levine -- whose earlier work, The Misunderstood Jew, is also a must read -- is not saying that each new generation shouldn't read these short stories with its own situation in mind:

"The texts must speak to each generation and each individual anew," she writes, "or they cease to be either scripture or literature and become only markings on a page."

Take, for instance, one of Jesus' most famous parable, the Prodigal Son.

"Just as the father is today usually seen as a cipher for God," Levine writes, "and the prodigal as the Christian who repents of his sin and is welcomed back by the gracious God, so also that older brother, out in the field, remains the Jew. . .who obeys the Father out of a sense of duty rather than of love, who mistakenly thinks that one must earn God's grace, and who refuses to welcome the marginal, outcasts, gentiles, or whatever group Christian readers see themselves as welcoming and the Jews, conversely, as rejecting."

(By the way, haven't you always felt moved by the younger son's decision to return to his father and confess his sins? By contrast, Levine (pictured at right) is having almost none of it: "I neither like nor trust the younger son. I do not see him doing anything other than what he has always done -- take advantage of his father's love." Oh, yeah, I said to myself, now I see that possibility.)

In this and other parables, she insists, "we need to clean out readings that are mistaken about early Judaism." (And, though she doesn't put it quite this way, also readings that are mistaken about early Judaisms, plural, for there were several varieties of Judaism at the time of Jesus, as there are today. And it's helpful to be careful about not lumping all Jews then or now into the same crowd.)

Levine is at once insightful and funny. It's what you'd expect from someone who watched a lot of the old "Rocky & Bullwinkle" show as a child and now can write about that experience in a serious book of theological import. And she has a sharp way of putting things to help you remember the point.

She writes, for instance, about a strange theology named after a second-century heretic named Marcion, a theology that leads one to imagine an old God of wrath in the pages of the Hebrew Bible and, by contrast, a reformed God of love in the New Testament: "Residual marcionism, the view that God had a personality transplant somewhere between the pages of Malachi and Matthew, is still alive and well in churches today; it is also still a heresy."

Levine argues that anti-Jewish interpretations of Jesus' parables "have infected much of New Testament study." And she gives people the tools to stop that.

Levine is clear that as a Jew she does not view Jesus as the long-promised Jewish Messiah. And yet she does find him fascinating and engaging: "Only Jesus," she writes, "insists on loving the enemy. . .He may be the only person in antiquity to have given this instruction."

These amazing little short stories, the parables, can continue to "provoke, challenge, and inspire," Levine writes, but not if today's Christian preachers and teachers continue to turn them into saccharine, inoffensive little children's fables with no shock, no challenge.

"If we hear them in their original context," she writes, "and if we avoid the anti-Jewish interpretation that frequently deforms them, they gleam with a shine that cannot be hidden."

Do your pastor a favor. Buy this book for her or him for Christmas, but give it early so you won't hear any more misguided parable interpretations.

The ebola scare has raised old concerns among some people of faith about the safety of vaccines. An organization called Christian Connections for International Health has produced this video in which Dr. Richard Lane of Liberty University describes why such fears are unfounded and why vaccines can help save lives. I urge you to view it and share it.