In some ways, religiously based bigotry is simply another form of bullying. 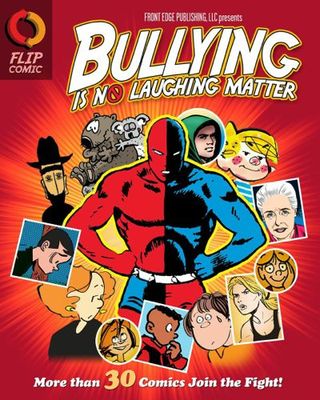 Think of a female Muslim teen-ager in a Western culture who gets teased and harrassed when she wears a hijab over her hair.

Or think of Jewish boys wearing a yarmulkah, or kippah, who experience similar bullying.

But bullying over religious matters is just one type of bullying that people of faith (and others, of course) should be working to prevent. After all, bullying attacks people made in the image of God, as religion says.

That's why I'm really pleased that my friend David Crumm, former religion reporter for the Detroit Free Press and creator of ReadTheSpirit.com, has used his book publishing business to produce a cartoon/comic book called Bullying is No Laughing Matter, compiled and annotated by Kurt J. Kolka, a journalist and artist.

The book contains anti-bullying comics by more than 30 artists, plus solid narrative information about what bullying is and what can be done to stop it. Also included is a personal story about being bullied by a high school student.

Then, if you flip the book over and start from the back, you'll find a full-length comics feature by Kolka called "The Cardinal: Wrath of the Warthog, a Bullying Story."

This can be a great resource for parents and grandparents to get kids to open up about ways in which they are being bullied -- or perhaps bullying others. As often happens with children of households in which there is domestic violence, they can wind up perpetrating more such violence as adults. And those who are bullied often become bullyers.

I love comics and was glad to be introduced to a few in this book I didn't know about. But it also was good to see some old friends, like Dick Tracy. The late Chester Gould who created that strip lived in my hometown of Woodstock, Ill., and was friends with my father. In the Tracy strip in this book, the great detective stops a student from perpetrating a massacre at a high school prom. Most of the comics are less graphic and violent about bullying, but bullying certainly runs the gamut.

THE CAUSES OF ISIS

Should religion be blamed for the rise of ISIS? This commentator says no. "Blindly blaming religion is a recipe for a failed foreign policy strategy that addresses symptoms rather than root causes, which in turn sets the foundation for more violence in the future," he writes. And he's right.