Home Archives Profile
When science clashes with dogma: 9-5-14
The battle against bullying: 9-8-14

From the moment in 1945 that allied troops began to liberate the death camps that had been created and operated by Nazi Germany, people around the world have wondered how a nation of presumably civilized people could have led such a massive and singular genocide. 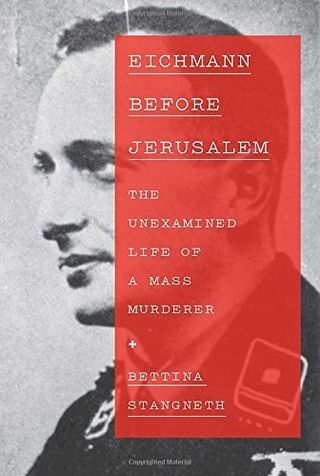 To most people, Jewish or not, the Holocaust, or Shoah, was simply unthinkable. Murdering six million Jews just because they were Jews (to say nothing of millions of others whom the Hitler regime considered undesirable) simply did not fit into any category that made sense. Indeed, it's one reason so many died -- they couldn't imagine that death could be the aimed-for fate of a whole people.

I have read a great deal about the Holocaust and have even co-authored a book that grew out of that astonishing period, They Were Just People: Stories of Poland During the Holocaust.

And yet I cannot say that I have ever found an adequate answer to the how-could-this-happen question. But I'm closer to an answer today thanks to a terrific and important new book, Eichmann Before Jerusalem: The Unexamined Life of a Mass Murderer, by Bettina Stangneth.

It is at once a profoundly revealing and meticulously reported account of Adolph Eichmann's life in (and before) World War II as the manager of the Holocaust, his post-war escape to northern Germany, then to Argentina and his capture there in 1960 by Israeli intelligence agents.

And although the author's main purpose was not to explain how a highly educated nation like Germany (from which my paternal great-grandparents came) could oversee the Holocaust, a section in the middle of this 579-page book offers an answer that's as clear as I've yet found:

Eichmann completely rejected traditional ideas of morality, in favor of the no-holds-barred struggle for survival that nature demanded. He identified entirely with a way of thinking that said any form of contemplation without clear reference to blood and soil was outdated and, most of all, dangerous. Here, reason, justice, and freedom were not permissible central concepts of human society. The very idea of a common understanding among all people was a betrayal -- to the minds of both Eichmann and his Führer.

For one thing, the Germans' superior might came from their ethnicity, and for another, the world didn't have room for everyone. The struggle among the races was in essence a struggle for resources -- a basic idea familiar to many people concerned about future wars over oil and drinking water today. However, Eichmann refused to countenance the idea that there might be room for a mutually agreeable solution. The only thing that mattered was one's own people. "What is right is what aids the people," and no one apart from one's own people had any rights.

Philosophy in the classical sense, as the search for transcultural categories and a global orientation, was an error, because it sought universals and did not accept dependence on ethnicity. Its outlook (and here Eichmann is quite correct) was fundamentally "international." As such, philosophy has no homeland, but -- and it is crucial to realize this connection -- to the purveyors of Nazi ideology, philosophy had a people. According to Nazi ideology and Hitler's tirades, there was one "race" that, having no homeland, had an international bent and revered the unbounded freedom of the mind: the Jews.

"The Jewish intellect," says a typical Nazi publication, "breaks away from the soil in which it is rooted and makes a rootless existence for itself." Furthermore, the Jewish attitude of mind "breaks apart the German human and undermines the German way of life," because it is not an "ethnically based thought." Only an ethnic thought makes it possible to build a national character, and humanitarian talk only allows this character to become confused and weakened. In an ideology that sees reconnecting with "blood and soil" as the only means of survival, any international outlook mutates into the ultimate threat. This threat must be destroyed before a global morality destroys concepts of the German ethnic morality and undermines German defenses. 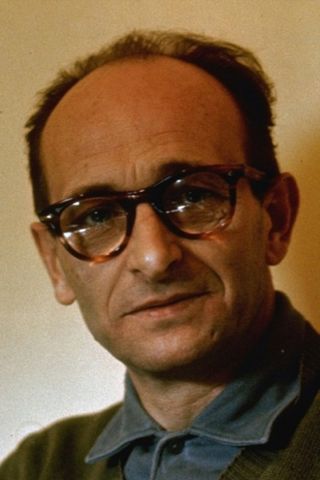 I have seen something like these thoughts expressed in many excellent Holocaust books, but I found this explanation by Stangneth to be especially clarifying. And yet in the end -- even  at the end of this engrossing account -- I still don't quite understand why and how an Adolph Eichmann (pictured here) could reject what Stangneth calls "traditional ideas of morality." But it's clear that he did and that the results were (and continue to be) catastrophic.

After Eichmann's famous trial in Jerusalem, Hannah Arendt, the German-American political theorist and author, wrote her still-famous book, Eichmann in Jerusalem: A Report on the Banality of Evil.

Scholars, historians, philosophers and others have been arguing about that book ever since. (A more recent look at the trial and what Arendt may have gotten wrong is found in an excellent 2011 book by Deborah E. Lipstadt, The Eichmann Trial. I wrote about Lipstadt's book here.)

Stangneth, using a huge stack of writing and audio tapes -- much of it done by Eichmann himself -- not previously either fully available or carefully analyzed, concludes that the picture Eichmann painted of himself at his trial (just a cog in the Nazi wheel, just a pencil-pushing bureaucrat following orders) is wildly out of sync with the reality.

Rather, the Eichmann revealed in the collection of documents and recordings known now as the Argentina Papers is ruthless, self-confident, authoritative and willing to acknowledge (even proud) that the result of his work as a Nazi leader in a criminal regime was the death of millions of Jews. The Eichmann that Arendt reported on from his trial in Jerusalem, Stangneth writes, "was little more than a mask. (Arendt) didn't recognize it, although she was acutely aware that she had not understood the phenomenon as well as she had hoped."

As much as Stangneth is able to reveal in this new work -- and it is a great deal -- she is careful to note that there still is more to learn about Eichmann and the Holocaust, partly because, as she writes, "Scandalously, the German authorities still hold files on Eichmann that have not been released to the public because their contents are deemed to be a danger to the common good." Some of this is simple bureaucratic caution, no doubt, but the longer these files are kept private, the more it looks as if even current German officials have something to hide.

At almost every turn in this book there is new and distressing information, including the huge failure of the post-war German government and others to capture Eichmann until 1960, the many failures to find incriminating documents in time to use them well in the 1961 trial and the willingness not to probe very deeply into the whole matter after Eichmann was executed in 1962.

What I found most intriguing was Eichmann's life in Argentina and his eventual willingness there to be taped recorded for hours and hours by a far-right-leaning journalist and former Waffen-SS man and to write huge amounts about his own thoughts. That journalist, Willem Sassen, and other Nazi sympathizers in his circle hoped against hope that Eichmann, in his writings and taped conversations, would prove that the Holocaust didn't happen -- at least not on the scale of six million Jewish deaths. Ultimately, however, their made-up world came crashing down around them as the facts became indisputable (except by fragile-minded Holocaust deniers, of which Eichmann himself was not one, save when he sought to avoid personal and public responsibility). But as the author notes, "Today, it's easy to recognize Eichmann's lies: fifty years of research have given us the arguments we need to resist him, and we can see the facts behind the fiction."

In the end, Eichmann was "a man for whom there really could be no defense," Stangneth writes. "He had demolished the whole scale of criminality."

Stangneth's phenomenal work should not, of course, be the end of explorations into Eichmann, Hitler, the Nazi regime or the Holocaust -- not if we are to understand and stop future Eichmanns, some of whom today can be found in the Islamist terrorist group ISIS.

Someone who could joke even about Eichmann? That would have been the late Joan Rivers, may her memory be a blessing. As Cathy Lynn Grossman writes, she offered humor with a Jewish touch and even used humor to remind people about the Holocaust.