It was nearly time for Rabbi Jacques Cukierkorn and me to start our presentation at the Holocaust Memorial Center in suburban Detroit a few weeks ago when I saw Zygie Allweiss arrive in a wheelchair. 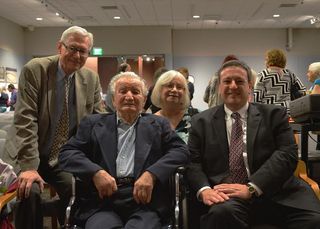 His daughter, Esther (pictured here with Zygie, Jacques and me), with whom we'd just had dinner, wasn't positive her father was feeling good enough to show up, but here he came with other family members, and both Jacques and I were delighted to see him again.

His story of surviving the Holocaust is the first one we tell in our book, They Were Just People: Stories of Rescue in Poland During the Holocaust, and the more we got to know Zygie the more we liked him. He was a tough hombre with a heart of gold. I encourage you to go back to your copy of our book (surely you have several) and re-read Zygie's remarkable story of survival with his brother Sol.

I first met Zygie in 2006 in Detroit, where I did the first interview with him on a trip that Jacques couldn't make.

Zygie then came to our September 2009 launch events for our book in Kansas City and won the hearts of the audiences to whom he spoke. In 2011 I was in Detroit for another conference and managed to get out to the home of Zygie and Irma Allweiss to visit them with their daughter Esther.

And then we saw him again the evening of Aug. 5 when we spoke in honor of him.

The survivors in our book are slowly disappearing. Sheila Bernard, Maria Devinki, Anna Schiff, Felix Zandman, Andre Nowacki, Felix Karpman (words of whose death we just received) and now Zygie Allweiss all have died. Had we waited much longer than we did to write this book we'd have lost many of the stories.

So farewell to our friend Zygie, whose funeral service this past Friday I was able to watch from the funeral home's website. A video of that service now is posted here. It's fascinating, revealing once again how the Holocaust touched almost every part of the lives of survivors and their families.  May Zygie's memory be a blessing.

Why is it a mistake to generalize about religion? Turns out it isn't "a" mistake, it's a whole bunch of mistakes, the author of this piece contends. And he's right. Indeed, even when we try to talk about certain religious traditions -- Catholics, say, or Jews or Muslims -- the fact is there are many varieties of each. And there's often even a pretty broad spectrum within any single congregation. So watch your language.