NORTH SPRINGFIELD, Vt. -- As I type this (July 9) I'm in a room next to the room in which my wife's sister died two years ago today. 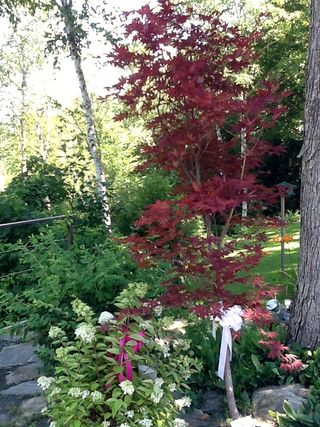 Everything is different now. And everything still is the same. That's how it is with death. I feel as if I could walk into the next room and visit Leslie again in her rented hospital bed in her home. And yet I feel as if she's been gone almost forever.

Her husband John, with whom my wife and I are staying for a couple of nights, has grieved deeply and has begun to find his sea legs again. Last night we met the woman he's been, well, if not exactly dating at least hanging around with a fair amount. We like her a lot.

I'm reminded of a poem about Lazarus, whom Jesus resuscitated from death after a few days. In the poem, poor Lazarus discovers that the world has moved on beyond him. His wife has rearranged his room, given away his dog, acted as if his return was simply out of the question.

Death leaves its mark everywhere. A few weeks ago I was in my hometown of Woodstock, Ill., giving a few talks about my new book, Woodstock: A Story of Middle Americans. I passed by my old house, where my now-dead parents lived for most of 50 years. I passed by the nursing home where both of them died. And I went to Oakland Cemetery to visit their side-by-side graves and place some flowers there.

Almost everywhere I went in Woodstock I ran into my parents' remembered presence.

And here in Vermont I run into Leslie's remembered presence. Her photos still adorn the refrigerator in the kitchen of her home. Seeing her daughter and granddaughter brings back memories of when they would come to this house as Leslie lay dying and simply be present with her. And John still speaks of her with love, with fondness, with joy for their long lives together.

Death seeks to obliterate us. It inevitably fails because we have memory, we have hope of afterlife, we have each other. And in our remaining common life together we refuse to let the one who has died become the one who is forgotten. Scripture asks, "Death, where is thy sting?" But, in fact, we feel the sting, all right. But its pain is not the final feeling, not the final word.

In our remembering, our speaking about the dead, our acknowledgement of our loss, the final word is ours. As it should be.

(The photo here today shows a tree with a bow on it that was sent  to Leslie's house as a gift as she lay dying.)

THE COURTS AND FAITH

Have you, like me, found it hard to keep up with the many U.S. Supreme Court decisions that have to do with religion? Well, here is a good analysis of such cases handled by the Roberts court in the last several years as a reminder.