When I was a boy in India, where I lived in 1956 and 1957, I first encountered Jainism. It's an ancient religion that today would be understood to have a deep concern for the welfare of all of life as well as for the planet itself. 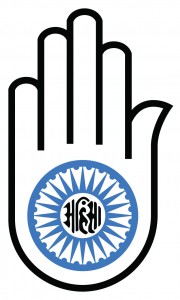 My first memory of seeing Jain adherents was watching someone walk down the street sweeping the sidewalk (or maybe road) ahead of him so as not to step on insects or other living creatures.

As a teen-ager I thought that was both amazing commitment and, frankly, a bit over the top.

But the more I learned about Jainism, the more respectful I became of it and its followers. Which is why I was happy to read my friend Markandey Katju's recent blog about Jainism. Markandey and I went to school together in India. He's retired from India's Supreme Court and now is chairman of the Press Council of India.

As Markandey writes, "The cornerstone of Jain philosophy is the concept of Anekantavad. This is defined as 'non-absoluteness', or 'non-onesidedness', or 'many-foldedness'." That means Jainism is "against dogmatism. It believes that reality is complex and multi-faceted."

You understand, no doubt, that there is a distinction between dogma and dogmatism. Every religion has dogma. But dogmatism is when the tail wags the dogma.

In a world where many people of faith are absolutely certain that they hold the only truth, we all could learn something from the theological modesty of the adherents of Jainism.

NORTH SPRINGFIELD, Vt. -- While I'm in Vermont for a family wedding don't look for the usual second item here on the blog. I hereby give you back a few extra minutes a day. Use them well. One way to use them today is to check out my latest National Catholic Reporter column, which should post by mid-morning here.

Surprised by Scripture: Engaging Contemporary Issues, by N.T. Wright.  As I've noted before, I don't think Bishop Tom Wright has ever had a thought that hasn't been published. On the whole, that's a good thing, because Wright is a clear, helpful thinker about matters of faith. This new volume is a series of essays that have had a previous life in one form or another, including as speeches. Wright seeks to help readers understand that the Bible today can be a remarkably useful tool in understanding and evaluating contemporary matters even though it was written centuries ago. I found Wright to be at his most interesting in this book when discussing 9/11 and the problem of evil. Here's part of what he writes: "The reaction in America and Britain to the events of September 11, 2001, was a knee-jerk, unthinking, immature lashing out. Don't misunderstand me. The terrorst actions of al-Qaeda were and are unmitigatedly evil. But the astonishing naivete which decreed that America as a whole was a pure, innocent victim, so that the world could be neatly divided into evil people (particularly Arabs) and good people (particularly Americans and Israelis), with the latter having a responsibility to punish the former, thus justifying the wars in Afghanistan and Iraq, is a large-scale example of what I'm talking about -- just as it is immature and naive to suggest the mirror image of this view, namely that the Western world is guilty in all respects and that all protestors and terrorists are therefore completely justified in what they do. The Western world, then, has not been able to cope with evil from within its modernistic beliefs."