From time to time over the years something I've written has wound up in some book or other. 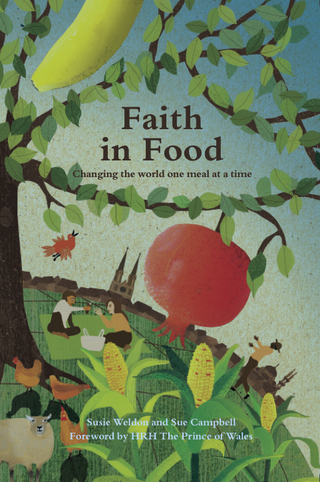 I remember, for instance, a story I wrote as a Kansas City Star reporter about a man barricaded in a house who turned out to be the son of a detective sent to try to investigate the situation. The lead of that story was used in a journalism book as a good example of how to get into these kinds of stories.

The most recent inclusion of one of my columns in a book is one I think readers of this blog might be interested in. The book is called Faith in Food: Changing the World One Meal at a Time, edited by Susie Weldon and Sue Campbell, with a foreward by the prince of Wales. (The link in this paragraph will take you to the U.K. site for the book. You can pre-order it in the U.S. at this Barnes & Noble site. It's due out in the U.S. by September, I'm told.)

The book republishes this column that I wrote for The National Catholic Reporter in 2010. It's about a Creighton University student's research project in which he sought to apply Catholic social teaching to producing and consuming food.

I didn't quite know what to expect as a final product when I was asked to allow inclusion of the piece in the book. But, in fact, the book is beautiful and full of fascinating essays about ways in which all of us can be more sensible about what we eat and can think about food in a more sustainable and moral way.

For instance, Prince Charles, in addition to writing the foreward, also has an essay called "What is Sustainable Agriculture?" And there are essays about the Eucharist in Christian tradition, about Hindu food festivals and about genetically modified organisms, among much else.

So I commend the book to you, just as I commend to you learning about the fascinating work of the Land Institute in Salina, Kan., where Wes Jackson and others have been working for years to produce perennial food crops, such as wheat.

If you've never been there, schedule a visit. Wes tells me we've been doing agriculture wrong for 10,000 years. Sort of makes you wonder how to do it right, doesn't it?

WHAT ABOUT BISHOP FINN?

Pope Francis met this week with victims of sexual abuse committed by priests and offered them these words (scroll down to find the English translation). Among them: "All bishops must carry out their pastoral ministry with the utmost care in order to help foster the protection of minors, and they will be held accountable." In Kansas City we're still waiting with growing frustration for that to apply to Bishop Robert W. Finn.