WASHINGTON, D.C. -- When I was a student at the University of Missouri in Columbia in the 1960s, I was always aware of (though I rarely was inside of) the A.P. Green Chapel, part of the Memorial Student Union building. 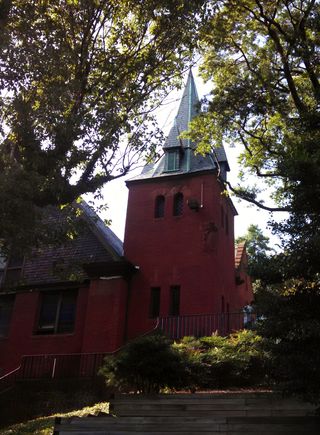 It got used in a variety of ways that added a richness, a depth to campus life.

I was reminded of that when I toured Howard University's campus here recently as part of the annual conference of the National Society of Newspaper Columnists. One of the stops was the Andrew Rankin Memorial Chapel (seen in this photo).

This list of speakers who have been at the Rankin Chapel is quite impressive, and I wish we'd been able to get inside the building. But we were there on a Saturday evening with a student tour leader who did not have access to the closed building.

Still, today's blog posting isn't just about this one chapel. It's about what such chapels historically have brought to college campuses.

They have served as a reminder that an education is not just about the head. Rather, a full education is also about the heart, about an awareness of matters that can't be tested in a science lab, about mystery that is ultimate.

These chapels serve many purposes, of course, but high on the list is simply their ability to declare that the world is a complicated place that requires a commitment to something other than mere material blessings. Chapels, even as they sit locked in silence, ask questions about ultimate meaning and purpose.

And college students who don't finally ask those hard questions don't really get much of an education.

Democrats in southern states, it's reported, are talking lots about how important religion is to them, too. Fine, as long as voters remember that there is no religious test for holding public office in this country -- no matter what some politicians and some religious leaders suggest.