One way to begin to understand Pope Francis and what motivates him is to understand a bit about his religious order, the Society of Jesus, or Jesuits. 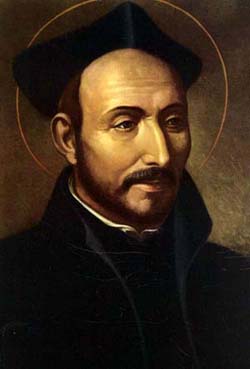 And this is an excellent day on which to contemplate the Jesuits, for it was on this date in 1556 that the founder of that order, Ignatius of Loyola (depicted here), died.

Ignatius was a Spanish reformer who was born in 1491, the year before Columbus set sail for what turned out to be the New World. The same year of 1492 is also when King Ferdinand and Queen Isabella formally ordered Jews in Spain to convert to Christianity or leave.

As you read about Ignatius and the Jesuits at the links I've given you above, keep in mind that the life of Ignatius overlapped the life of Martin Luther and that by being known as a Catholic reformer, Ignatius naturally is often contrasted and compared with Luther, leader of the Protestant Reformation.

Pay attention, too, to the Jesuits' vows of poverty and chastity, to say nothing of obedience. There you will find some important clues as to what drives Francis, the first Jesuit pope. In this era of celebrities we often separate famous people from their formative influences and imagine that they are whole creates unconnected to anything but their celebrity. That would be a big mistake if you're trying to grasp who Francis is.

SNAP, the Survivors Network of those Abused by Priests, is marking 25 years of working to be advocates for victims of abuse, and, as Religion News Service reports, is expanding its work beyond the Catholic Church. SNAP and its leaders have some great accomplishments though at times it has seemed they have been a little more provocative than necessary. And yet had the church hierarchy responded to this crisis in a timely and honest way that reflected core Christian values SNAP would be an unnecessary organization. So far, sadly, it's far from unnecessary.