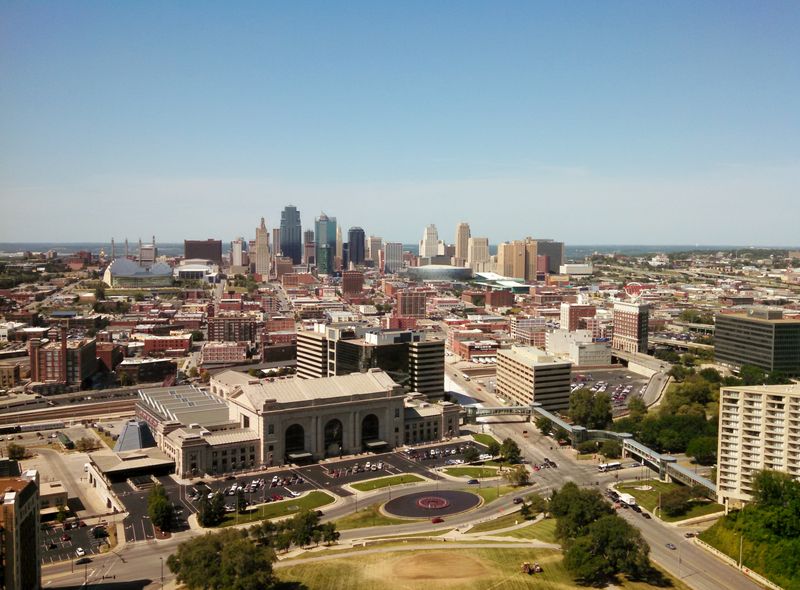 The National World War I Museum in Kansas City is fabulous. It's well designed, impressively filled with artifacts from the period and endlessly engaging. The "but" is coming, so hold on.

Two of my wife's brothers and their wives from Vermont visited us last week and the museum was one of our stops. (This photo of downtown Kansas City is one I took from the top of the Liberty Memorial tower there on a gorgeous day.)

As I walked through the museum, I was looking for evidence that the curators are paying attention to what historian Philip Jenkins has highlighted in his new (April 2014) book, The Great and Holy War: How World War I Became a Religious Crusade. I have read a fair amount about the book, though I haven't yet read the book itself. But I know of Jenkins' impressive reputation from some of his previous books, including The Next Christendom: The Coming of Global Christianity. So I'm comfortable suggesting that what Jenkins' has written about WWI is well worth considering.

At the museum, however, I found precious little to suggest that religion had anything to do with World War I.

Oh, one sign had a note about military conscription at the time and said some believed that system helped to bridge gaps between "rich and poor" as well as "Catholics and Protestants." And I found at least one religious symbol (pictured here) -- a Christian cross that was a temporary grave marker for a soldier killed in 1917.

But the casual visitor to the museum would be hard pressed to find much evidence that Jenkins' theory is right that, in the end, WWI was very much a religious conflict.

As one reviewer of Jenkins' book has noted, the author finds "religious rhetoric in the mouths of countless combatants on both sides of the Great War. In Germany, Russia, Britain, America, and the Ottoman Empire" such rhetoric helped to drive people toward extravagant enthusiasm for the war.

I'm among the many people who had never thought that WWI had much to do with religion. But I suspect Jenkins is on to something. Indeed, there's hardly a historical event of any kind that doesn't have some thread of religion running through it. So I think the curators of the excellent museum in Kansas City would do well to think about ways to take Jenkins' work and theories into account as they tell the story of the horrific war that began just 100 years ago.

Wedding ceremonies in Catholic churches are in precipitous decline, it's reported. Hmmm. Wonder if people think of that tactic as a way to avoid divorce and all that can mean in Catholicism.

P.S.: My National Catholic Reporter article about the 40th anniversary of the "irregular" ordinations of the first female Episcopal priests now is online here.