I rarely write reviews of books or make critical comments about them until I've either finished reading them or decided that they're not worth finishing. 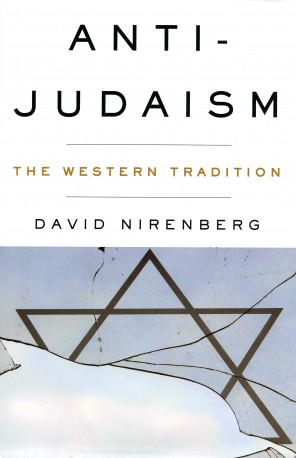 (I hope none of you makes the latter decision about any of my books. If you do, don't tell me.)

But I'm going to break with that tradition a bit today to suggest to you that David Nirenberg's book, Anti-Judaism: The Western Tradition, which I'm about one-third of the way through in a Kindle edition, is not just an important addition to the literature about Jews and their relationship to the rest of the world but is, in some ways, essential reading for people who want at least to begin to understand what author Robert Michael, in the title of his book, calls Holy Hatred.

Nirenberg traces the long, sad, lamentable arc of anti-Judaism all the way back to Egypt in the time the Bible describes as a period of slavery for the people of Israel.

This, of course, predates the kind of viscious anti-Judaism that quickly attached itself to what eventually became Christianity once it separated itself decisively from Judaism. (For my essay on anti-Judaism in Christian history, look under the "Check this out" headline on the right side of this page.)

(Anti-Judaism, by the way, is theological in nature. From the start of the Christian era, it has meant a disgust with Jews for not accepting Jesus of Nazareth as the Messiah. By contrast, modern antisemitism is a product of the 1800s and has much more to do with racial stereotypes that depict Jews as money-grubbing, filthy, power-hungry, people seeking to control the world through a small cabal of secret leaders, as described in the bogus book The Protocols of the Elders of Zion, which still has many followers although it has been conclusively proven to be a fraud.

I've certainly been aware that most antisemitism today erupts not from Christianity but from radical Islamists, who continue to blame Jews for existing and for wanting to be secure in the state of Israel. But what I didn't know in the kind of detail Nirenberg provides is how an anti-Jewish attitude infected Islam from the very beginning and is reflected in various passages in the Qur'an. (This is not, of course, to say that all Muslims are antisemites. Not at all. Indeed, there are many Muslims making good-faith efforts to create harmonious relations with Jews, Christians and others. But in some ways they've had to overcome an early bias against adherents of both faiths, just as Christians have had to overcome almost 2,000 years of virulent anti-Judaism preached from Christian pulpits.)

Well, I've given you enough, I hope, to interest you in the book even though, as I confess, I haven't finished it yet.

Anti-Judaism, as Nirenberg asserts, has indeed become a Western tradition -- and may even extend beyond the West. It is an attitude that shames the West, Christianity, Islam and maybe others. Some days it leaves me speechless.

(I may get back to you with more when I eventually finish the book.)

A Southern Baptist leader says social media inevitably are involved these days in marital infidelity. Think how bad it would be if Facebook were named after some other part of the body.

P.S.: Rabbi Jacques Cukierkorn and I will be speaking at Detroit's Holocaust Memorial Center Aug. 5 about non-Jews who rescued Jews in Poland. If you're in the area come join us. For details, click here. Our book is They Were Just People: Stories of Rescue in Poland During the Holocaust.