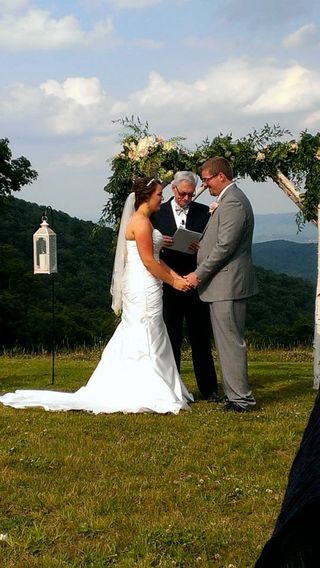 Over the centuries it has meant different things in different cultures and it certainly has come about in different ways -- from an arranged family business transaction to a political statement to a simple ceremony marking a commitment of lifelong love. And no doubt much more, as this BBC piece describes.

I'm guessing that in the long history of humanity (well, it seems long to us though in the history of the cosmos it doesn't amount to much time) today's modern model of two consenting adults falling in love and agreeing to be committed to each other over a lifetime (or divorce, whichever comes first) is pretty unusual.

All of these thoughts were rolling around in my head here recently as I officiated at the wedding of a niece of my wife and the young man Jenny fell for, Mike.

As you can see in the photo here today of them and me (a photo I didn't take) it was an outdoor wedding. In fact, to get to this plateau halfway up a mountain at the Sugarbush Resort in Vermont, we had to use the ski lifts.

It was such a spectacular site that I ad libbed a bit at the beginning of the ceremony and asked people just to stop a minute and look at the beauty, which is its own excuse for being.

In some ways marriage itself is its own excuse for being, in the sense that there is a natural drive in people to survive and reproduce (and seek companionship) and that requires some pairing up.

What modern marriage is not, I have pretty much concluded, is a God-ordained man-woman-only arrangement. If, in fact, God had ordained such an institution, why was what we'd called bigamy today protected by Mosaic law? And why have many cultures (including among Christians and Jews) established marriage in so many different ways over the centuries? Does God have that much trouble being clear about the rules?

Well, it was a gorgeous day for a wedding here at Sugarbush and Jenny and Mike made a gorgeous couple. We had music and readings and vows and rings and prayer and all the things that go into a modern marriage. What we did not have was the only model of marriage available throughout history. And it's probably helpful to remember that when it comes to human relations sometimes we make up the rules as we go along. But as we do that, let's try to be sure that those rules don't hurt or exclude people for terrible reasons.

A new study suggests that gay people who affiliate with gay-friendly religious congregations may do better with life that those who don't. One more reason for gay Christians to be attracted to such denominations as the United Church of Christ, the Episcopal Church and, finally, my own denomination, the Presbyterian Church (USA).