I finally have had a chance to read my friend Adam Hamilton's new book, Making Sense of the Bible: Rediscovering the Power of Scripture Today. 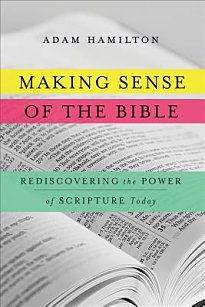 And before I give you my reaction to it, it's fair to ask what it means that I consider Adam (pictured below) a friend and how that might affect my view of his work.

Over the years Adam and I have exchanged conversations and ideas, been in each other's company for this or that event and have, I would say, grown to respect each other. We've even shared a meal together. And Adam now is the pastor of one of my daughters and her family.

So I would say Adam and I are good friends but not close friends. I think that's a fair distinction. And I think that disclosure is fair for you to be able to judge what I now write about his new book.

Making Sense of the Bible is exactly the kind of book I would recommend to people who feel either uncertain about how to understand scripture or who, by contrast, feel way, way too confident that they know exactly what the Bible says and what it means in all passages. It's the latter group that is the most dangerous and it's that group who will find it most difficult to hear what Adam has to say.

There really is nothing in the book in the way of biblical scholarship that most Mainline and Catholic seminary students haven't been exposed to for the last 50 or more years. Which is to say that Adam rejects the pitiful crutch of biblical literalism and insists that we do our homework and our work of discernment to grasp what the Bible is trying to tell us through the many, many voices of its authors.

Adam certainly believes that the Bible is in some important sense the word of God. But for Christians, he writes, that concept must always be secondary to the idea that Jesus Christ is the living Word (as Christians capitalize it) of God. In Christianity, after all, truth is not a dogma, not a doctrine. Rather, truth is a person, and that creates enormous freedom from any unneeded attachment to magical words, precise doctrines and locked-in concepts about God. 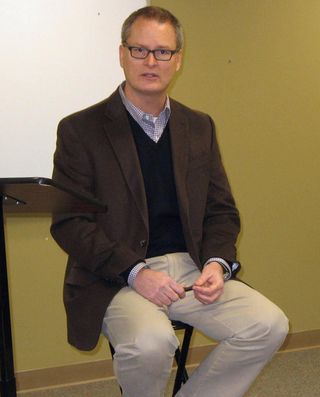 The call that Jesus made to his contemporaries -- to, as Adam writes, "move beyond the letter of the law to the spirit of the law" -- is precisely the call that Adam makes to his readers. Don't get stuck in the "history" of stories that clearly are not historical and aren't meant to be. So, no, God didn't make the world in six literal days. Nor did God form plants before God formed a sun to nourish them.

The creation stories are not meant to be scientific accounts of real history. They are, rather, supposed to tell us something about God, about us and about our relationship to God.

Literalism kills. Literalism destroys the very life of the Bible. And misses the point. Over and over, though not using those words, that's Adam's point. Yes, he describes a major brand of this literalism as "verbal plenary inspiration," an approach that infects a large segment of the Christian church. But he doesn't lose the reader in academese. He does, however, remind us that a major commitment to this kind of literalistic reading of the Bible did not come about until the "Chicago Statement on Biblical Inerrancy," adopted in 1978 by the Evangelical Theological Society.

Beyond avoiding literalism, he notes, we have to be discerning about whether what we read in the Bible applies to us today in our circumstances.

"What Paul wrote to the Galatians concerning a particular situation," he writes, "may not be what he would say today, two thousand years later, to you or your church."

Adam takes on most, if not all, of the major issues one encounters when trying to make sense of the Bible (and, by the way, because there are several varieties and versions, exactly which Bible do you mean?). What do we make of the tales in the Hebrew scriptures in which God is seen as authorizing genocide? What do we do with passages that seem to stand against certain homosexual acts? How are we to understand words from Paul that seem to tell women just to shut up when in church? What could Jesus possibly have meant that "no one comes to the Father except through me"? And on and on.

An exploration of all that is here -- a reasonable, level-headed, wise exploration that takes the Bible seriously but not literally.

Still, it's not that I don't have a few nits to pick with Adam. I do. Some of this writing is repetitive -- in a teacher, repeat-to-learn sort of way, but still repetitive. Some of it gets a bit sloppy in its effort to remember that, for instance, Paul was always a Jew and that there was no separate "Christianity" until after Paul's time. There was, instead, the Jesus Movement within Judaism. So I want to put a red X on page 122 when Adam says that "Paul was the leading evangelist and apologist of the Christian faith in the first century." That's anachronistic.

And -- very small point -- I'm not sure why Adam regularly uses the term "Jewish rabbi." Isn't Jewish understood when the term rabbi is used? (I'll have to ask my Buddhist rabbi friends.)

In all, however, this is a book that many Christians would benefit from reading. They might just begin taking the Bible seriously -- not as a rule book, not as a history book, but as a divine love letter through many voices, one that calls people to love God and love neighbor.

We'll make this an All-Adam-Hamilton-All-The-Time weekend by alerting you to this news item that says Adam is trying to move the United Methodist Church toward a local option system when it comes to issues about gays and lesbians. That church eventually will get to the right place, but it's taking hard work by people like Adam to move it to the right side of history and the right side of biblical ethics and values.