Home Archives Profile Subscribe
Catholicism's growth in the U.S.: 6-9-14
The Vatican as peacemaker: 6-11-14

The day Pope Francis gathered the Israeli and Palestinian presidents for prayer at the Vatican, my congregation heard from a local rabbi and a local Muslim leader about their hopes for peace in the Middle East. 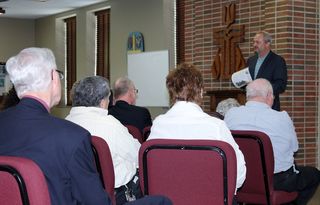 We didn't plan our event to coincide with the prayer summit. Our conversation with Rabbi Scott White (pictured here at left) and Ahmed El-Sherif (pictured below at right) had been planned for several months, while the meeting at the Vatican was just announced last month on the pontiff's trip to the Middle East.

Still, we took note of the coincidence and of our mutual hope that something -- almost anything -- would work to stop the violence, stop the injustice, stop the terrible history and begin to create an atmosphere in which a just peace is possible. 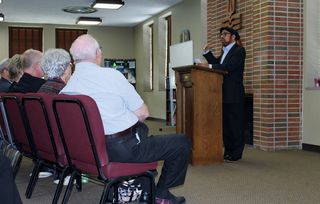 Because I was the moderator of the White/El-Sherif conversation, I wasn't taking notes and I'm not going to quote either of them in any detail here except to say that both of them believe a two-state solution can work (although Ahmed seems to care less about whether the final answer is two states or simply a way for human rights to be protected and respected in all areas there) and think the sooner a just solution happens the better it will be for everyone but that getting there may be terribly complicated.

Although we didn't focus on it much at our Sunday gathering, what moved us to set up the conversation was a report issued by a Presbyterian body, "Zionism Unsettled." Many Jews found its conclusion that Zionism itself is the main problem in the Middle East terribly misguided. But others found the report prophetic in terms of standing up for the Palestinian people.

Starting this Saturday in Detroit, the national governing body of the Presbyterian Church (USA) will consider various resolutions ("overtures," in Presbyterian-speak) that take different, even conflicting, positions on the Middle East. My hope is that in our zeal to be peacemakers we won't make things worse, which we've done sometimes in the past.

At any rate, it seems to me we're nearing a potentially vital point in the Middle East and we Americans should be much better informed about what role the U.S. is playing there (not always constructive) and what a possible peace agreement might look like.

So please do what you can in your local congregations to have a helpful, informed conversation about all of this. And then let's follow developments in the Middle East and tell our elected leaders our hopes and dreams. And, of course, let's continue praying daily. It's a reminder that we ourselves have a responsibility to move a broken world toward wholeness.

Speaking of Presbyterians and the Middle East, here's a story about the possibility of my denomination approving divestment from some companies that do business in Israel. I'm not convinced this is the right approach.