I have no good idea why, but I love stories about people who see the face of Jesus on a grilled cheese sandwich or the Virgin Mary on a municipal water tower or in a cloud. 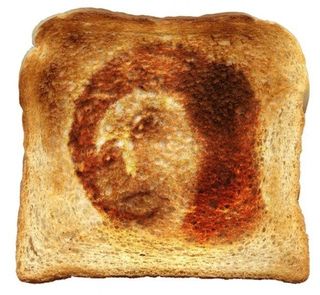 Well, some researchers at the University of Toronto and partner institutions in China have been looking into this phenomenon, which (Who knew?) has its own name, "face pareidolia."

They have concluded that this phenomenon is entirely normal.

“. . .our findings suggest that it’s common for people to see non-existent features because human brains are uniquely wired to recognize faces, so that even when there’s only a slight suggestion of facial features the brain automatically interprets it as a face," said Prof. Kang Lee of the University of Toronto.

As the press release about this matter says of the researchers, "They discovered face pareidolia isn’t due to a brain anomaly or imagination but is caused by the combined work of the frontal cortex which helps generate expectations and sends signals to the posterior visual cortex to enhance the interpretation stimuli from the outside world."

The brain is a strange and marvelous wonderland. Just the other evening -- true story -- I was at a large public event and a woman I've known casually for some years came up to me to tell me that I had appeared in her dreams an evening or two before. In that dream, her daughter was getting married and was required to get marriage counseling. I turned out to be the counselor.

Well, at least she didn't see my face on a piece of toast or something. I'm not worthy of that. Toast should be reserved for the face of Jesus, the bread of life.

The great writer Marilynne Robinson has given this wide-ranging and enlightening interview to Religion News Service. Here's a money quote about biblical literalists who think the Bible condemns homosexuals: "And if you choose to value one or two verses in Leviticus over the enormous, passionate calls for social justice that you find right through the Old Testament, that’s primitive."