When I spoke this past Sunday night at the prayer vigil for victims of the fatal shootings that afternoon at the Jewish Community Center and Village Shalom in suburban Kansas City, I made the point that no religion has a full and satisfying answer to the question of theodicy -- which is to say, the ancient question of why there is suffering and evil in the world if God is good. 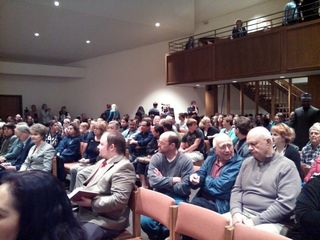 And although it's certainly true that all theodicies fail eventually, we can say without fear of contradiction that human free will, when misused, adds to the world's pain.

The man arrested in Sunday's shooting, for instance, seems to have made an independent decision to commit this heinous crime -- aiming at Jews, although the three people murdered all were Christians. From what we think we know at the moment of the alleged shooter and of his sordid history, he may have elected to act on long-discredited, racist ideas that cast the Jewish people as what the Nazis considered them to be -- subhuman and not worthy of life.

But Nazi leaders did not make their free-will decision to regard Jews that way out of nothing. There was, in fact, nearly 2,000 years of Christian anti-Judaism that helped to create modern antisemitism, without which the German-led Holocaust would have been unthinkable. And as author David Nirenberg writes in his new book, Anti-Judaism: The Western Tradition, some of the roots of Christian anti-Judaism predate Christianity itself and can be traced as far back as ancient Egypt.

Still, just because they seem intractable we are not relieved of our obligation to challenge them, stand against them, defeat them.

For as seemed evident on Sunday, when we fail to destroy evil ideas, someone almost inevitably will employ his or her free will to put those ideas into action.

So the question for everyone is this: What will you do today to counteract the evil of anti-Judaism and antisemitism so it can be eviscerated?

HOW IT SHOULD BE DONE

In this time of angst about murderous relations between people of faith, here's a story to cheer your heart. It's about an Oklahoma Christian who sent supplies for Passover to a Jewish U.S. soldier stationed in Afghanistan. Take that, bigots.

P.S.: The annual AIDS Walk in KC is coming up and I'm working with my congregation to raise funds that support the AIDS Service Foundation here. If you can help even a little, click here and make a donation. Many thanks.

A SECOND P.S.: It's time to sign up for one or both writing workshops I'm offering about getting from pain to hope through writing. The first will be April 29-30 at Heartland Presbyterian Center in Parkville, Mo. For that one you can find all the details you need right here. The second one will be the week of Aug. 11 at Ghost Ranch in northern New Mexico. For details of that class, click here. Come join us.