What must Christianity discard? 3-4-14

When John Dominic Crossan (pictured here), one of the most widely known Bible scholars, came to Kansas City to speak a few days ago I looked forward to asking him a question that his work (and the work of similar scholars) has raised for me in recent decades: 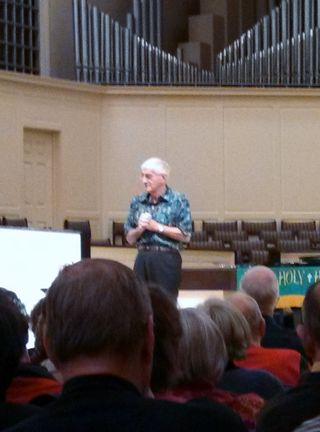 How much, if any, of Christianity does he think must be destroyed in order to save the religion? And what will be left if that happens?

After he spoke Friday evening at Village Presbyterian Church, I got the chance to raise just that question with him in the Q&A portion of his talk.

But I and others came away thinking that he really didn't answer my query. Rather, he used my question as an opportunity to repeat a point he had made earlier, which is that history is full of examples, including the Roman Empire, of "peace through victory." What Jesus advocated, by contrast, he said, was "peace through justice."

And that, he implied, is what he hopes will survive as a central Christian way of living and a model for all of humanity.

"I think," he said, "the vision of peace through victory is a bankrupt vision." The model that Jesus gave 2,000 years ago of peace through justice still is the model of how we should live, he said.

Well, as a Christian I find that hard to argue with, but Crossan still didn't tell me what parts of contemporary Christianity he thinks need to be jettisoned so that the faith can thrive in this post-modern era.

Must we do away with our styles of worship? Should we decentralize the importance of the Bible? What about our governance structures? What about the way we choose and ordain leaders? Is any of that ready for the trash can of history?

Author Phyllis Tickle says (especially in her book, The Great Emergence) that about every 500 years the church has a giant rummage sale in which it discards things that no longer work or seem relevant. And, she contends, we're at one of those 500-year points now.

I think Crossan agrees with that observation. I only wish he had given us the benefit of his thinking about what needs to be pruned in order to save the tree. Peace with justice is the right goal, but I'm not at all sure you need Christianity to achieve that, given how many other faiths as well as moral secularists believe in that.

WHAT'S WRONG WITH THIS PICTURE?

Some Baptist churches in Kentucky are trying to attract people by giving away guns as door prizes. Why does this seem like PETA seeking new members by giving away real fur coats?