Someone finally has done what I've often thought about doing -- create a blog about death, one that takes death seriously but doesn't take life too seriously. 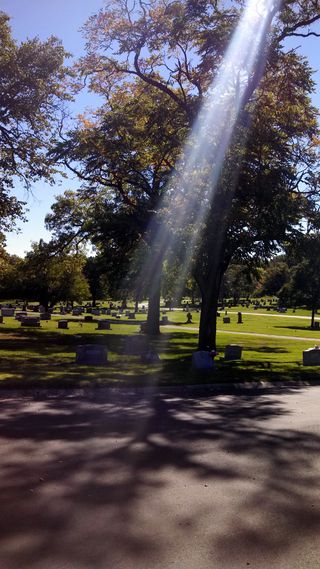 And, it turns out, the blog is written by someone in a position to know about all of this -- a funeral director.

It's called "Confessions of a Funeral Director," and it ranges from deeply serious to funny.

I learned about this from this Religion News Service story about the blogger, Caleb Wilde, who hails from Pennsylvania.

Scroll down in his blog and start with "A Bleeping Day in the Funeral Business." A great piece.

Each religion looks at death a little differently, but all of them in some way seek to help answer people's questions about death. The not-so-secret secret is that nobody really knows those answers. All we have are guesses and faith.

Most days guesses and faith are enough for me.

(The photo here today is one I took last year at a cemetery near where I live. I had no idea until I got home that the streak of sunlight would show up in the photo.)

With Fred Phelps reported to be lying near death, my former Kansas City Star colleague Yael Abouhalkah has some thoughts about this misguided soul who caused so many people unnecessary pain and suffering with his virulent anti-gay theology. As I said on Facebook over the weekend, even though Phelps and his vile Westboro Baptist Church picketed me five times, I won't be among those picketing his funeral. I don't need revenge to know how wrong Phelps was about so much. I'll have more about Phelps and his clan tomorrow.

The A-Z of C.S. Lewis: An Encyclopedia of his life, thought and writings, by Colin Duriez. Fifty-plus years after his death (he died the same day as John F. Kennedy in November 1963), C.S. (Jack) Lewis remains enormously popular. And for many good and different reasons. Many Christians rely on his book Mere Christianity as a guide to their faith. And many children (well, adults, too) remain fascinated by his Chronicles of Narnia. I find myself returning again and again to his A Grief Observed, a relentlessly honest look at death and bereavement. But it's hard for someone to keep all of Lewis straight and to remember the whole of his life and works. This new book by a Lewis biographer will help enormously. It's a highly useful compendium of everything Lewis, from Abhalljin to Zardeenah. You will find here characters in novels, titles of books, people in his life and much more. It's a remarkable way to marinate in Lewis's work and life. And it's a lot more interesting to read than your average encyclopedia or dictionary.

P.S.: You're invited to join me at the 6 p.m. Shabbat service this Friday at Temple Israel of Greater Kansas City, which meets at Kehilath Israel, 105th and Conser, Overland Park. I'll be offering the sermon based on my new book, Woodstock: A Story of Middle Americans, and signing books afterward.