I used to think that I never would live long enough to see the day when gays and lesbians acquired equal rights under the law, were accepted as a normal part of society and were not condemned by any religion, especially mine, Christianity. 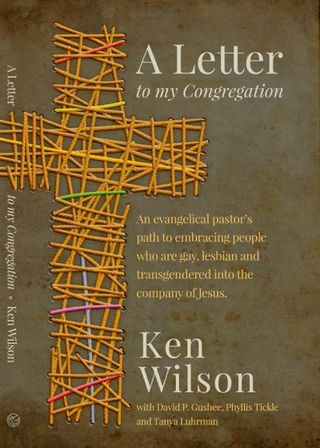 But the rapid change in society on this issue in the last 10 or 15 years has been simply breath-taking. Same-sex marriage now is legal in 17 states, and the momentum is only gaining strength. My own denomination, the Presbyterian Church (USA), after decades of struggle over the matter, now allows for the ordination to ministry of otherwise-qualified gays and lesbians. And on and on.

Perhaps in another decade or two, the matter will be considered essentially settled in the U.S., though obviously it's going to take longer in some other countries.

Chip by chip by chip the barrier wall that has kept homosexuals out of the mainstream of society is being destroyed. And good riddance.

Another chip that just got blasted off the wall has come from Ken Wilson through the publication of his new book, A Letter to my Congregation: An evangelical pastor's path to embracing people who are gay, lesbian and transgender into the company of Jesus.

This is an important book written from the heart of the founding pastor of Vineyard Church of Ann Arbor, Mich.

Slowly and carefully, he describes his journey from someone who believed that homosexuality was condemned by God and that this condemnation was made clear in the Bible to someone who believes the Bible makes no such argument and that gays and lesbians should be welcomed fully into the church.

In many ways, it's the same journey others have taken in recent decades. The best book on this subject prior to Wilson's is by Jack Rogers, Jesus, the Bible and Homosexuality.

Wilson is well aware that many, if not most, Christians who would call themselves evangelical or conservative still believe homosexuality is a sin -- or at least that homosexual acts are sinful -- as a result of a distorted reading of the Bible. So he is careful not to dismiss such thinking without leaving some room for finding ways for Christians who disagree about this to live together in reasonable harmony.

For the purpose of living with disagreement (which he calls a third way forward), he relies on chapters 14 through 16 of the Apostle Paul's letter to the Romans in the New Testament. There, Wilson says, Paul describes "disputable matters" within the community of followers of Jesus. That, Wilson says, is a model for us now, meaning we should be able simply to call the question of homosexuality a disputable matter and not insist that everyone agree today on how to handle it. Eventually it will work itself out.

What concerned me about Wilson's proposed approach, however, is that it seems too reasonable. Which is to say that there are biblical literalists in the church who are convinced that they have the only God-approved interpretation on this issue and who aren't willing even to consider homosexuality a disputable matter. That would be, in their view, caving into evil. These folks, at best, Wilson says, are wiling to "love the sinner but hate the sin." At the other end of the spectrum are people who say they are "open and affirming," and who, in Wilson's view, tend to be arrogantly dismissive of anyone who disagrees with their interpretation.

And yet if people like Wilson and Rogers can change their minds, perhaps there's hope even for the most stern ideologue on this issue -- just as there may be hope for "open and affirming" people who read this book and gain a new appreciation for the time and effort it has taken for Wilson himself to abandon traditional Christian positions on this matter.

The question of homosexuality may not, in fact, be a "disputable matter" to people who are convinced they are right on the issue, but their willingness to call it that and live peacefully with people who disagree with them would be a sign of love and of a commitment to the unity of the church: "A true unity of the Spirit is possible," Wilson writes, "without adopting a common perspective on this question."

That strikes me as overly optimistic, but I hope he's right.

What moved Wilson to change his thinking was his role as a pastor. He kept encountering real-life situations that challenged him to be pastoral instead of a rigid rule-follower. It's a good model for others.

Well, there is much more here, including an interesting look at marriage itself.

My guess is that in 10 or 20 years young people who come across this book will say, "Really? This kind of writing was necessary for people to abandon their prejudicial, exclusionary, unloving treatment of gays and lesbians in the church?"

At the moment the answer to that question is yes. I hope a similar book won't be needed in a few years. But for now I'm glad my friend David Crumm of ReadTheSpirit.com elected to publish it.

(By the way, for a related and engaging piece about how the United Methodist Church is dealing with homosexuality, read this blog entry by my friend Adam Hamilton, founding pastor of the Church of the Resurrection in Leawood, Kan.)

WILL PRAYER RAISE THE DEAD?

What do you make of faith healers? The author of this account I found on BBC isn't quite sure what to make of them either, but it's an intriguing read, nonetheless.

P.S.: Rob Hoch author of By the Rivers of Babylon: Blueprint for a Church in Exile, will speak at 10 a.m. on Saturday, March 22, at Second Presbyterian Church at 55th and Brookside in Kansas City in an event sponsored by the Presbyterian Urban and Immigrant Ministries Network. The event is free, but reservations are requested by March 19 to Heartland Presbytery, 816-924-1730.