As many of you know, Rabbi Jacques Cukierkorn and I wrote They Were Just People: Stories of Rescue in Poland During the Holocaust, published in late 2009. 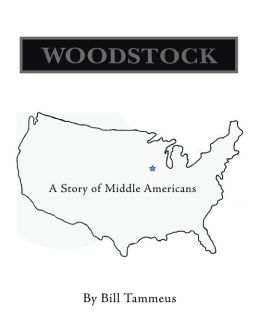 I'm thrilled to tell you that now I no longer can call that my latest book. My next book has just been published in both a print edition and an e-version. It's Woodstock: A Story of Middle Americans. (Those links will take you to Amazon.com. Both versions are on the Barnes & Noble site here.)

Rather than it being purely a memoir or just about Woodstock, it’s an attempt to help readers understand what people I call Middle Americans brought to this country in the wake of the so-called Greatest Generation.

Here’s a paragraph from the book about that:

Middle America stretches geographically beyond the Midwest. It was and is, finally, a state of mind, a middle-class way of living that has more to do with industriousness than with wealth, more to do with an eagerness to learn than with advanced college degrees, more with an openness to possibilities than with the benefits of inheritance, with an ability to know we need to adapt and change than with a resolute determination to remain fixed in place. It has to do with a capacity for outrage when, finally, we have seen enough. It also has to do with being pragmatic, practical, optimistic, ethical, problem-solving, patriotic in a broad sense and not cynical. We were and are more open-hearted than open-minded, but at our best we are both.

So does it have anything to do with faith, religion and ethics, the focus of this blog? Oh, indeed, yes, though I certainly would not call it a religious book.

For instance, I have a chapter called "The Church Basement," in which I describe a hideout some of us young teens created there. Here's some of what I write about that:

What was really happening down in the basement of that church building when a handful of boys moving through puberty gathered to look at pictures, talk and smoke? I know the answer now, though I didn’t then. The answer is: Church was happening.

Church, at its core, is about relationship — vertically with the divine and horizontally with other humans. We boys were figuring out the horizontal part of that in a building where people practiced the vertical part together. Together. That’s the key. We were comrades, plotters, secret-keepers. We were learning to trust one another, to rely on one another, to have one another’s back. That later turned out to be a foundational Middle American value.

And I have a chapter called "Faith," in which I write this:

In the end, Middle Americans who grew up in the middle of the last century wound up with a faith that was both simple, in the good sense of that word, and simplistic. They prayed for parking spaces for themselves and believed God could spare them from natural disasters if God wanted to. They were properly baffled by the many mysteries of faith but willing to use clichés (some of them quite unbiblical) to explain (apparently to their satisfaction) what otherwise made little sense: God helps those who helps themselves; your dead loved one is in a better place now; God needed a sweet angel in heaven so he took your child; let go and let God; our thoughts and prayers are with you; the Lord giveth and the Lord taketh away…

And there's much more, including a chapter in which I wrestle with the meaning of evil.

So I invite you to read my new book. I've given you the Amazon and B&N links above, but you also may buy an autographed copy of the book for less than the prices there directly from me. If you send me an e-mail at wtammeus@gmail.com, I'll reply and tell you how that can happen.

If you're waiting for me to write a book about the Woodstock music festival, well, you might want to buy two of my new Woodstock book and just pretend one of them is about that other Woodstock.

I hope to say more about this here on the blog next week, but the State Department's annual report on human rights abuses came out on Thursday, and it describes a grim picture in many places. Read it and weep.