The New Testament does not contain what can be considered a biography of Jesus of Nazareth. Clearly there are stories in that part of the Bible about his life -- his birth, his ministry, his death, his resurrection. But there's nothing that 21st Century people would consider anything close to even a Wikipedia-standard biographical sketch of the god-man many consider a member of the Holy Trinity. 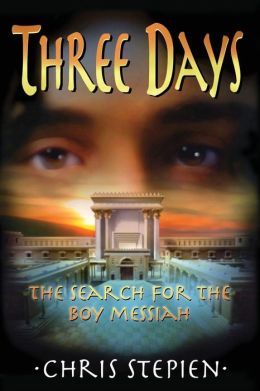 Indeed, between Jesus birth and the beginning of his ministry we have only one New Testament story -- briefly told -- of when he was 12 years old and went to Jerusalem with his parents for Passover, only to be lost there for three days. His parents, the gospels say, were headed back to Nazareth when they finally realized he wasn't with them. So they returned to search for him.

Regular readers of this blog know that although I review, mention and talk about a lot of books I rarely review fiction.

I'm going to make an exception today to introduce you to Chris Stepien's new novel, Three Days: The Search for the Boy Messiah.

As the title clearly indicates, it tells the story, in fiction, of that fascinating tale of the 12-year-old Jesus being lost and being finally found in the temple in Jerusalem as he was impressing everyone -- including religious leaders -- with his theological knowledge and wisdom.

Stepien's book is a good read, an intriguing read, a helpful read. It doesn't qualify as great literature but I think readers (especially Christians familiar with the biblical accounts) will find it engaging and will get a much better sense of Jesus' Jewish context than most Christians now have. (To help with that Jewish context, Stepien uses the name Yeshua for Jesus and other spellings to refer to the original Hebrew names.) (Second interruption here: If you want a great book to help you understand Jesus' Jewish context, read The Misunderstood Jew, by Amy-Jill Levine.)

I say it's not great literature for several reasons, one being that at times Stepien drifts into telling us the obvious. For instance, when he describes King Herod's order to murder all male children in and near Bethlehem who are two years old or younger, he adds: "It was a horrible, evil command."

Well, of course it was. Nobody needed to be told that.

But the story that Stepien concocts is at once inventive (with various interesting made-up characters entering Jesus' life) and quite literal, with him returning to traditional Jewish and later biblical sources for the exact wording of certain prayers and quotations from scripture.

In some ways I wish the Bible itself had told this story in this way. But the Bible's purpose was not what we 21st Century folks think of as biographical. So Stepien, who, God bless him, spent much of his career as a journalist, offers this version of the story. It may not be factual, but it feels true. So one can imagine that it might well have happened this way.

KUDOS FOR PAT ROBERTSON. NO, REALLY.

I almost never get the chance to give Pat Robertson some applause for saying something wise because he almost never does. But let me lead the applause for his remarks about young-Earth creationism after a recent (and rather silly) creationist-evolutionist debate. Here's the money quote: “To say that it all came about in 6,000 years is just nonsense and I think it’s time we come off of that stuff and say this isn’t possible.”