In a country with a changing religious landscape and a history of religious freedom, prayers to open legislative bodies have become increasingly problematic. 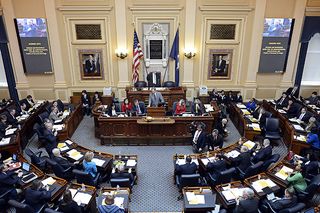 In fact, we'd do better either to abandon the practice or to designate Monday for Christians, Tuesdays for Jews, Wednesdays for Muslims and so on through however many religions we think there are (a difficult number to determine).

Take for instance, the recent troubling experience in the Virginia House of Delegates (pictured here) as reported in this story.

Prayer before legislative sessions is an old practice, but it began back when pluralism, if the term was used at all, referred not to religion but to whether you came from England, from another European country or were recently born in the New World.

Now, however, Virginia (and nearly every other state) counts among its residents adherents of many religions.

The answer, if you ask me, is not to be "inclusive" in public prayers, which means saying a prayer to some sort of generic deity so as to offend no one. That's silly. It reduces religion to some syncretistic stew that satisfies no one and should offend pretty much everyone.

The answer, rather, is to acknowledge that it's impossible to say an opening prayer that will let the person praying feel free to follow his or her heart and theology if the one praying must be so general as to say nothing, in the end.

Once you acknowledge that you have two choices, as I have indicated: Designate a member of each religion to pray on a particular day and let people know that on alternate Thursdays, say, a Hindu will lead the prayer. If you don't want to hear a Hindu prayer, don't come.

The other, wiser, choice is to abandon the public prayer practice altogether. That would allow the Christians to gather with the Christians, the Jews with the Jews and so on a few minutes before the opening of the session and pray among birds of a feather with no holds barred.

The current alternative of having Christians preaching the gospel of Jesus Christ in their public prayers while others feel manipulated and excluded is just wrong.

This ain't rocket science, children. It's just learning how to negotiate our way toward harmonious religious relations in a nation that is not your grandfather's Virginia (or Missouri or...).

Here and there in the world you still can find brave people of faith willing to risk their lives to do the right thing. In the troubled Central African Republic, for instance, a Catholic priest and his church are protecting hundreds of Muslims from the angry mobs there who want them dead. We don't yet know how this will turn out, but the so-called Christians calling for Muslim blood are bringing shame to themselves and to their religion.