Once again some Presbyterians (my denomination) have waded into the Israeli-Palestinian conflict and stirred up anger and passion. 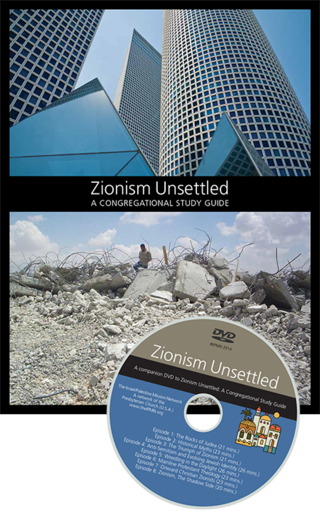 As you may have read over the weekend, the Israel/Palestine Mission Network has issued a new report called Zionism Unsettled (the cover of which you see pictured here). Thus far I have not had a chance to read the report. Rather, I have read about it and have read various excerpts from it. So don't imagine that what I'm saying here today is any kind of careful review of the details, proposals and conclusions of the report.

Rather, what I want to point out is what this piece by JTA, the Jewish news agency, points out, which is that not all Presbyterians are on board with the thrust of this latest report and that the report is causing sharp reaction.

My guess is that when I finally get a copy of the full report and have time to digest it, I will have a number of concerns and questions about its conclusions. In fact, I'm already not happy with some of the language the report is said to contain.

What I do know -- and have written in the past -- is that sometimes my denomination (or anyway parts of it) does and says things without enough forethought and enough consultation with either our Jewish brothers and sisters or our Palestinian brothers and sisters. (We Presbyterians as a body and individually tend to favor a two-state solution with justice and fairness for all, including security for Israel and a hopeful future for the Palestinian people. This new report seems to call into question the legitimacy of Israel as a Jewish state, however, which I think would be quite a minority position within the denomination.)

Some years ago, for instance, we authorized our leaders to look into divesting from companies that were profiting from the Israeli-Palestinian conflict. Such divestment tactics worked well in pressuring the former apartheid government of South Africa to abandon that odious policy of racial segregation and oppression.

But in the case of Israel, we Presbyterians seem not to have spoken at any length with Jewish leaders about our concerns and so our divestment action surprised and angered them. I felt that those Jewish leaders were mostly right about that. Our long-standing good relations with American Jews took a major hit from that experience. And the issue isn't dead yet.

Now, as you can see from the JTA piece, some Presbyterians have angered Jews again.

On this issue, as on so many other issues, the agenda gets driven by people who care most deeply about the issue -- in this case the issue of what's happening in the Holy Land and what the future there should look like. So various groups advocating this or that position come together and seek to set denominational policy.

Presbyterians are governed by representative democracy, and as can happen in such a system, when the broader electorate is apathetic, disinterested or simply ignorant, those in the know can guide the ship. It happens with lots of issues, including our long fight over whether to ordain otherwise-qualified gays and lesbians to be pastors and church officers. (We now do allow that and I am in favor of that position.)

So my caution for you is that when you read about "Presbyterians" saying or doing this or that (or, for that matter, any big group), please recognize that we aren't a monolithic, lock-step people.

As a Presbyterian elder, I may wind up thinking this new report is the cat's pajamas and may do what I can to promote its views (though, as I have said, I doubt it based on what I've read about it so far). But I also may find myself thinking it's a serious mistake that will cause more harm than good.

I'm free to take either of those positions as a Presbyterian because we are people who value both the wisdom of the whole community but also the prophetic voices of individuals within that community.

That may be more inside Presbyterian baseball than you bargained for today, but I offer it because my guess is that some of you soon will be hearing more about renewed Presbyterian-Jewish tension over this report and you'll be wondering what has gone wrong again.

THE GOOD BOOK ON THE SILVER SCREEN

Bible stories are being turned into a spate of new Hollywood films, it's reported. No surprise. People are drawn to stories with eternal meaning. The question is whether the film makers understand they are dealing with both history and metaphor -- and can they keep from turning one into the other.