I found it intriguing a few days ago when Kansas City Police Chief Darryl Forté said that rowdiness by uncontrolled groups of teen-agers on the Country Club Plaza no longer would be tolerated. 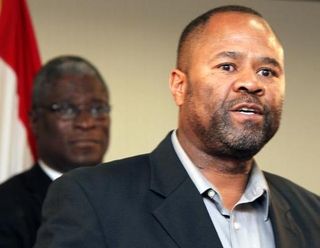 Well, such scary hooliganism should not, in fact, be tolerated. The chief (pictured here in front of Mayor Sly James) is right to do what he can to stop it. (The photo was taken by my friend Fred Blocher of The Kansas City Star.)

But let's put this problem into a little perspective. And let's see what people of faith might be called to do when it comes to large groups of predominantly African-American young people looking to hang out on The Plaza.

First, let's acknowledge that The Plaza is a Kansas City jewel. Its beauty and its wide range of shopping and dining experiences draw people from all over the city, the region and even the world. But this is generally high-end retail. Once upon a time -- indeed when I moved to Kansas City in 1970 -- you could find among the ritzy stores on the Plaza a dime store, a bowling alley, a Sears department store.

So people of means, most of whom are white, tend to think of The Plaza as their home territory. And throughout its history it has been a wonderful place for everyone -- rich or poor -- to walk, relax and to admire the Spanish architecture and for those who could afford it to dine, to shop.

In recent years, however, groups of teen-agers, most of them black, have congregated on The Plaza, especially on weekend nights, and sometimes the result has been rowdiness and occasional violence, including shots being fired.

It's been going on for several years. As The Kansas City Star story to which I linked you above reported a few days ago, "The violence peaked in the summer of 2011 with a shooting that injured three youths and sent the mayor diving for cover."

For you non-Kansas Citians reading this today, it may help you to know what you can see in the photo here today: our mayor and our police chief are both African-Americans, and both are excellent public servants.

The deeper question, however, is whether Kansas Citians are more worried about protecting their beloved Country Club Plaza or about the direction of the lives of minority teen-agers in the city. The evidence suggests Kansas City's priority is not the latter but the former. How sad.

Among such evidence you see the decades of decline and failure of our public school system, which now is not even accredited by the state of Missouri. If we really cared about the future of all -- all -- of our young people we would be working hard to rescue our public schools, which in turn would be working hard to open up the future for students.

Some of that is happening, but not nearly enough.

My congregation, for instance, is part of an 8-church coalition that works with the Southwest Early College Campus, once known as Southwest High School and once one of the best high schools in the nation.

As part of that current work, I help with a book club for 9th and 10th graders. It makes a difference in a few lives but the needs are many and the resources of money and volunteers are not nearly enough.

I'm not suggesting that we quit patronizing stores and restaurants on The Plaza. Or that we demand that the police set up barricades to keep out teens. No. We can have a successful Plaza as well as successful schools and successful teens.

We just need to step up and help And people of faith, who pledge allegiance to the idea that every single human being is precious in God's sight, should be among the leaders. So find out what your congregation is doing to help. If the answer is nothing, change that.

NOW YOU KNOW THE REST OF THE STORY

OK, quick civics quiz: Who wrote the U.S. Constitution? No, silly, not any of the Founding Fathers. It was God. At least that's what former Congressman Tom Delay says. But wait. If God wrote it, how come it's had to be amended so much? Maybe it's like someone said of the whole world: It was God's Science Fair project -- on which God got a D.