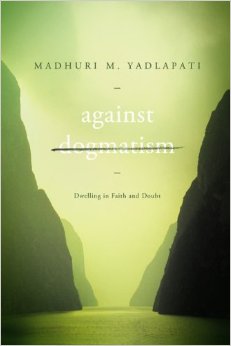 Whatever name this destructive condition gets, the result is almost always the same no matter what religion we're looking at: Needless division, prejudice against "the other" and a willingness to use almost any means, including violence, to insure that those who disagree with the rigid positions outlined do not succeed in questioning orthodoxy.

One need not go to the far extremes of religion to find this tendency toward keeping doubt and uncertainty outside a faith's high walls. So although you can use, say, Fred Phelps and his virulently anti-gay Westboro Baptist Church or the followers of bin-Laden theology among those who call themselves Muslims, the desire for unswerving certainty exists in almost all faiths to varying degrees, and it is almost never an attractive quality.

In Against Dogmatism: Dwelling in Faith and Doubt, religious studies teacher Madhuri M. Yadlapati does an intriguing interfaith survey of this dogmatic tendency, drawing on some of the best thinkers in various traditions to show the harm rigid dogmatism causes.

"Today," she writes, "we are haunted by a postmodern inability to know things with certainty. This lack of certainty frightens many into retreating behind straightforward formulations of faith and scripture. However, this lack of certainty is precisely the contemporary challenge to embrace the freedom of spirit that lies at the heart of many traditional religious prescriptions.

"The ancient bibical condemnation of idolatry does not simply criticize prayer that uses stone images; it attacks the elevation of what is human-made above God. Retreating from the abyss of nonknowing is a failure of religious nerve. Rejecting the mystery of the sacred in favor of straightforward human interpretations is idolatrous in the classical biblical sense because it limits the sacred to human manipulation."

I have said before that it's arrogant of us to say anything about God, given that God is infinite and unknowable and that we are finite and limited in what we can know. And yet we say a great deal about God and sometimes insist that our words and thoughts are the very words and thoughts of God.

The sacred, the ultimate, the transcendent is too far beyond our reach for us to think we can exhaust the meaning of the divine with our words -- especially given the reality that words are always metaphorical, in that they always point to a meaning beyond themselves.

Absolutism in religion rejects that and makes an idol of its own language, its own thoughts, its own formulations of what faith means.

Yadlapati makes a strong argument that we must be on the lookout for such dogmatism and turn away from it when we see it. And as we adopt that stance, she writes, we are required to ask some hard questions. Among them: "If faith is not primarily about certitude, then what is it? If religious faith does not consist primarily of assent to a set of belief propositions, then what is it? How are faith and doubt related?"

You will find her drawing here on such theological giants as Paul Tillich and Jurgen Moltmann to make her points about Protestant Christianity. I especially like this quote from Tillich: "When (religion) defended its great symbols not as symbols but as literal stories, it had already lost the battle."

She also considers Hinduism, among other faiths, and notes that the god Shiva "threatens to destroy our false expectation. The worship of Shiva articulates a clear sense of ambiguity, by which worshipers are forced to actively question all that they understand in order to liberate themselves from these trappings and realize enlightenment."

In the end, the author calls us to face our "ever-growing opportunities to dwell in the uncomfortable space of uncertainty. . .and seek to act faithfully and hopefully in the world today without retreating into the false and lazy security of certitudes."

Would I invalidate her point if I said I was pretty certain she's right?

SPEAKING OUT ABOUT A BISHOP

I was glad to see my former Kansas City Star colleague Mary Sanchez weigh in yesterday on the effort to get the Vatican to get rid of Bishop Robert W. Finn of the Catholic Diocese of Kansas City-St. Joseph. The work she describes there is in harmony with this open letter to Pope Francis that I wrote for The National Catholic Reporter not long ago.