As Billy Graham appears to be nearing the end of his long life, it's difficult for me not to wonder if he's disappointed in the route his son Franklin (pictured here) has taken. 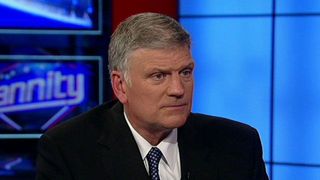 Billy showed kindness, moderation, a willingness to admit errors and a commitment first to the gospel and not to whatever culture wars were being fought at the moment. I disagreed with some of his theological approaches, but there has been to the man a certain core decency and authenticity.

Rarely, if ever, did someone write of Billy what sometimes is written of Franklin. For instance, this Patheos blog rips Franklin apart for his defense of Phil Robertson, the "Duck Dynasty" star whose recent faith-based statements about homosexuality and blacks caused such a stir.

In the end, of course, we cannot control our children -- and no good parent wants to. Our job as parents is to give them roots and wings and let them succeed or fail on their own, always knowing that we love them.

Still, it's hard not to imagine that sometimes Billy Graham wouldn't like to box Franklin's ears, even if only metaphorically.

THE IRISH ON XMAS

Ireland is all atwitter because its president once again didn't mention Christ in his Christmas message and his spokesman says it's inappropriate to ask about the president's religion. If a religion depends for its support and future on what politicians say about it, it's in big trouble.