The recent death of Prof. Ian Barbour -- in many ways the godfather of the modern dialogue between science and religion -- provides an opportunity to think anew about where that conversation is going, if anywhere. 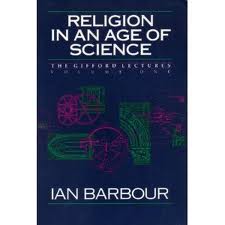 Barbour, a scientist who later went on to divinity school and author of the book whose cover you see pictured here, is described in the piece to which I've linked you above as giving "birth almost single-handedly to the contemporary dialogue between science and religion."

And that's an important conversation. The problem is that we have people at opposite ends of the spectrum who dismiss the other side and think science and religion have nothing to say to one another. We have the flat-earth anti-evolutionists who say all you need to know about science you can find in the book of Genesis. And we have the ultra-materialists who think religion is a pile of worthless superstitions and that the people who follow a religion are simpletons not worth talking to.

In the middle are the rest of us.

And it's in that middle where the conversation should and must take place. People of faith should be acknowleding the wonderful (and, yes, also dreadful) things science has achieved and the way it has enlightened our lives. And the scientific world, in turn, should be acknowledging that religion seeks to answer the "why" questions that science is not now and never will be in a position to answer. And yet those answers can help shed light on the meaning of science.

I was pleased a few years ago through my church to be part of a Kansas City science-religion dialogue group that for several years held seminars in which we explored such topics as evolution, genetically modified foods and genetics. The goal was for that effort to become self-sustaining after its initial funding through the Templeton Foundation ran out. I regret that didn't happen.

But for a new year's project, maybe one of you would like to see if you can fire it up again.

What a good idea.

Several years ago I met Bishop Otis Charles, the first Episcopal bishop to acknowledge publicly that he's gay, and it was from him that I got help clarifying my position on gay marriage. Charles died the other day at age 87. RIP. He made the compelling argument that marriage is a civil right and that gay couples who want marriage should be married by the state -- as, indeed, all couples who want marriage should be. Then, if they want the blessing of a faith community they can ask for it. The faith community is free to say no and that infringes on nobody's civil rights. Exactly.