What is being called a "Christian awakening" is happening in Israel, this Wall Street Journal article reports. 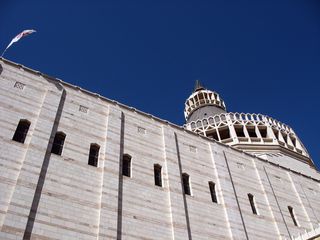 Christians make up a small minority of the population of Israel, but a new movement there wants those Christians to be seen as patriotic Israeli citizens willing to help defend the country. This newly emphasized stance has created some relationship difficulties with Palestinian Christians and Muslims, as you might imagine. And no one can say how all this will work out.

All of this, of course, comes as revived Israeli-Palestinian peace talks are supposed to be getting under way, though as this report indicates, there's always something that troubles the waters there. This time it was the way in which Palestinian leaders reacted to the release of Palestinian prisoners and how Israelis found that revolting.

Nothing seems to be easy about peace in the Middle East. Still, Americans can be glad that Secretary of State John Kerry is working hard to find a way through this thicket.

Kerry has proven to be an effective negotiator in several tense international situations, and the whole region, to say nothing of the world, would benefit if he and others were successful in finding a way for peace to return to the area.

(The photo here shows the Church of the Annunciation in Nazareth, mentioned in the Wall Street Journal piece. I took this photo last year.)

Because my maternal grandparents were from Sweden, I tend to think of the place as an enlightened nation of good, hearty folk. So it's always disappointing to me to find that it's at times also the location of religiously based vandalism, such as painting swastikas on a mosque. What kind of irrational fear drives the use of such hated symbols?