The fascinating country of Turkey has been in some turmoil in recent weeks over corruption allegations, and some of the trouble has caused some to wonder what it might have to do with a Muslim leader who lives in Pennsylvania now, Fethullah Gülen (pictured here). 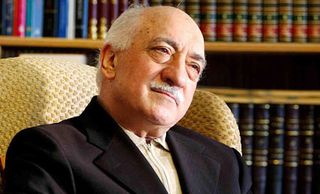 In recent years I have gotten to know some people connected with Gülen and I have come to admire their work and, by extension, to admire the work and thinking of Gülen himself. Some of them oversee the Raindrop Turkish House in Lenexa, Kan., a Kansas City suburb, and are involved in promoting interfaith understanding and dialogue. Indeed, this group has helped quite a few Kansas Citians take what they later described as marvelous educational trips to Turkey.

At the same time, there always has seemed to be a bit of mystery about Gülen, and he certainly has had his critics, both inside of Turkey and outside.

Today I want to link you to a rather extensive look at Gülen through the eyes of a journalist who has covered Turkey and who then wrote about him a couple of years ago after visiting his headquarters in Pennsylvania.

I will not pretend here today to understand the current trouble in Turkey well enough to offer an analysis of it. (I've been to Turkey only once, and that was just to change planes, but I have a friend there now on a Fulbright study trip and hope he can give me a good update when he returns.) Rather, that trouble gives me the chance to let you read more about Gülen and the movement with which he's associated.

That, in turn, should help you and all of us remember how diverse Islam is. This is a religion divided not just between Sunni and Shia and not just between traditional Muslims and the radicals in the bin Laden branch whose views and actions demean Islam. Rather, Islam is a religion of many factions, some of which get along famously with others and some of which are nearly always at odds with other Muslims.

Hmmm. Sort of sounds like Christianity and Judaism, doesn't it?

President Obama's religious commitments continue to fascinate lots of folks, including those fools who still believe he's a Muslim. Here's a New York Times piece examining Obama's religious practices and thinking. It's not clear to me that we learn much here we didn't know, but perhaps it satisfies our curiosity.