What's a good way to spend your 23rd wedding anniversary? 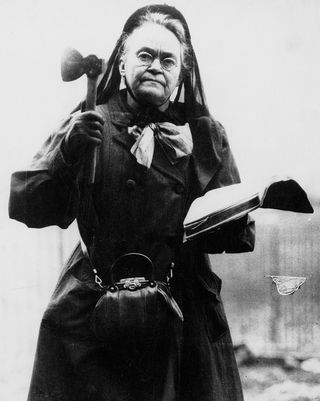 If you're a religious (in this case Christian) fanatic, you might spend it committing violence against your perceived enemy. At least that's what Carry Nation (pictured here) did on this date in 1900, having been married on this date in 1877.

The violent prohibitionist went to a saloon in Wichita, having previously gone to Kiowa, Kansas, and, using a brickbat, smashed the place up. Several month earlier she smashed up not just one place in Kiowa. She hit six different drinking establishments that day.

It may not surprise you, as this piece will reveal, that Carry Nation felt God was telling her to smash up saloons as a way to standing against the evils of alcohol.

My advice: When you think you hear God speaking directly to you and only to you with a message that involves violence, get 3,267 of your closest friends to verify what you are hearing. If even one of them votes no, listen to that one.

Alcohol certainly has wrecked lives, and there are reasons to be against its abuse, for sure. But taking a hatchet or rocks -- or hijacked airplanes -- to other people's businesses is not how civilized people go about changing things.

Carry Nation, by the way, also smashed up saloons on 12th Street in Kansas City in 1901. When I first came to town in 1970, there still were saloons along that stretch of 12th Street, where now a big hotel sits. Oh, and you still can get a drink in that hotel today. Nice work, Carry.

A RABBI GOES TO CHURCH

Instead of God speaking craziness, I now offer you my friend and co-author Rabbi Jacques Cukierkorn speaking much good sense after he attended a Christmas Eve service this week at an Episcopal Church.