Over the years I have followed various ways in which churches and other faith-based organizations have ministered to people in prison. 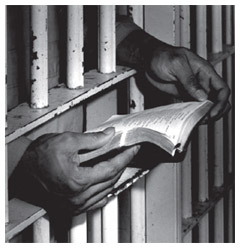 A few years ago, for instance, I wrote this piece from the Missouri correctional facility in Cameron, Mo., about the Kairos ministry there.

Even as far back as the late 1970s or early 1980s, I was writing about Prison Fellowship, the ministry started by Chuck Colson, a Watergate convict. I even drove Chuck around Kansas City to various speaking engagements one night back then.

So I was intrigued to read this new "Sightings" column from the Martin Marty Center for the Advanced Study of Religion at the University of Chicago.

As you will see, the article says that "Partnerships between religion, government, and prison are rapidly increasing."

As long as constitutional boundaries are respected, this increase is, on the whole, a good thing. There are benefits for both the prisoners and the government. And the courts seem to be keeping a watchful eye on the situation so that the programs with religious motivations don't wind up as means for the government to advocate one religion over another.

The goal is rehabilitation of prisoners. If these faith-based programs are helping with that without violating church-state separation borders, good.

THE VALUE OF RELIGION

You don't often find people writing in financial journals about the benefits of religion, but here's a piece in Forbes that argues religion is good for all of us, even those without any religious affiliation. I'm not sure I want to pick a faith based on a cost-benefit analysis, however.

P.S.: Today marks the start of the 10th year of this blog. If you're new here, you've got lots of catching up to do, but all previous entries are in the archives, which you'll find on the right side of this page.

Partnerships between religion, government, and prison are rapidly increasing. - See more at: http://divinity.uchicago.edu/sightings/faith-based-prisons-more-religion-equals-less-crime-%E2%80%94-brad-stoddard#sthash.J4vr9A3u.dpu