As we move into Christmas week, it's time to ask an indelicate question: Is evangelical Christianity dying in the United States?

But as this intriguing American Scholar piece makes clear, in some ways the obvious answer appears to be yes. 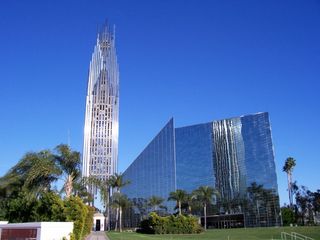 Jim Hinch, who wrote the piece, is the religion writer for the Orange County Register, and he's right to draw a distinction -- one often missed by people -- between evangelical and fundamentalist Christians.

Hinch, who pays a lot of attention in his piece to the former Crystal Cathedral (pictured here) in Orange County, describes evangelicals as "more theologically diverse and open to the secular world than their fundamentalist brethren."

True, but there's more: People who would call themselves evangelical as opposed to fundamentalist tend not to be biblical literalists and, thus, tend not to adopt such positions as being proponents of a young (6,000-to-10,000 years or so) Earth. Evangelicals also are more open than fundamentalists to the possibility that other religions also convey truths and that Christianity may not have a monopoly on salvation, though most evangelicals would say that faith in Christ is the basis of the possibility of an afterlife.

Hinch's conclusion about evangelicalism's future may be stated a bit too broadly, however: "evangelicalism is not only in gradual decline but today stands poised at the edge of a demographic and cultural cliff."

I call that too stark a view partly because in one sense all of Christianity is evangelical. What does that mean? It means that Christians believe they are called to tell the story, the good news, the gospel in some way. It can be communicated through preaching but also through action.

St. Francis of Assisi is said to have put it this way: "Preach the gospel at all times; when necessary use words."

So in a broad sense, evangelical is a term that can be used to describe all Christians, though in recent decades the term has been applied mostly to those who say they are "born again" (another term that could be applied to all Christians) and to those who use such phrases as "Jesus is my personal Lord and Savior."

The fact is, the ground under American Christianity has been shifting ever since the first Christian set foot in the New World. And it will continue to do so. If so-called evangelicalism is slipping now it simply means that some other approach to the faith may be rising. Or that all approaches to the religion may be declining.

There is nothing static about American Christianity. And churches or denominations that want to freeze the calendar and hold their place in time and space soon will discover that time and space have left them behind.

Uganda officially has gone over the sanity edge by passing legislation imposing tough penalties on people for being gay. Hey, wait. Let's solve the problem of Fred Phelps & Co. by getting up a collection to move them to Uganda, where surely their homophobia would be more welcome.