One of the most amazing religious works of art is the Saint John's Bible, and a copy of its seven volumes, completed in 2011, now is on display at the Greenlease Library at Rockhurst University as this photo shows. (To clarify: The display is in Greenlease Library, not the art gallery of the same name.) 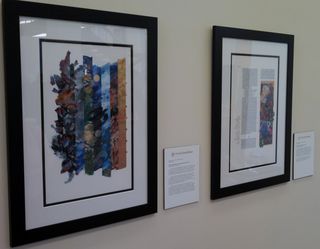 I've written about this hand-written, hand-drawn Bible before, and I own two volumes of copies printed for public ownership, but I've never seen all seven volumes in one place available to have their pages flipped by viewers.

All seven volumes will be at Rockhurst until the first week of October. But two volumes will remain on display at the library until next August.

Tim Ternes, director of the Hill Museum and Manuscript Library at St. John's University, adjacent to the St. John's Monestary, which undertook the lengthy and expensive process of producing the Bible, spoke to a small group of clergy at Rockhurst the other day to introduce the exhibit there.

"It has been 500 years since a monestary of any size has commissioned a work like this," he said "This was a huge undertaking. Scholars and historians and theologians have looked at this work and have independently all said something very similar: Do you realize that the commission of the St. John's Bible is probably the most significant art commission since the commissioning of the Sistine Chapel?"

The first major decision about the commission was which translation of the Bible to use. Eventually those leading the project chose the New Revised Standard Version because it is the most widely accepted modern version across Christianity.

Project leaders, he said, wanted to make sure that this is not a Bible just for the Catholic Church. Rather, it needed to be universally used and universally appreciated.

And because it's hand-calligraphied and drawn on velum, it's expected that the original work of art will last at least 1,500 to 2,000 years.

Near the display of the seven volumes you'll find framed individual pages on the wall, as the photo at left shows.

It's really breath-taking stuff. I hope you'll get a chance to stop by.

Copies of the seven volumes go for roughly $60 to $80 each, but you can find them at a lower price on Amazon.com.

In the top photo here, the person at the far end of the table on the left is Bishop Robert Finn of the Kansas City-St. Joseph Catholic Diocese. I asked him if the diocese owned copies of the books and he said no: "We're poor." So I told him I might put my two copies in my will to donate to the diocese. Hey, maybe I will.

THE LIGHT SIDE OF FAITH

Here are a couple of fun items for this weekend. The first is a chart that helps you figure out whether you're in the right religion or branch thereof. For all I know it was done with a serious intent, but that's not the way I'm taking it. Next, here's a piece about bargain religions. Are you serious enough about your faith to laugh about it sometimes? I hope so.

P.S.: Are you aware of "Interfaith Voices" on the radio? Check it out here.