BREWSTER, Mass. -- Two little blond boys are paddling around near the shore of Breakwater Beach (pictured below) here on Cape Cod, and they make me think of what such waters taught me when I was their age. 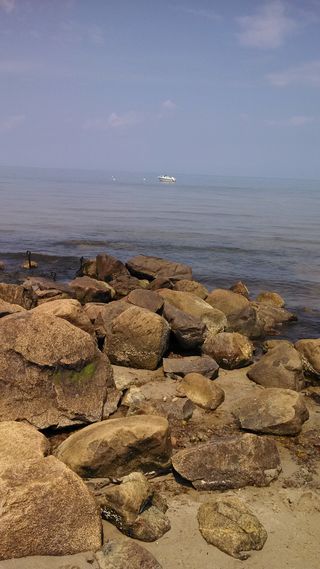 Many years ago I used to watch the low, unhurried but insistent waves on the shore of Buttons Bay on Lake Geneva in southern Wisconsin, just north of my hometown of Woodstock, Ill. They eventually taught me to try to control only that which was in my power to control.

I have no control at all over the waves, over the gravity, the slow movements of the Earth's plates that churn up the waters, the tides. So I must let the waves come in as they come in and not imagine that they are subject to me.

And just to point out the obvious, the waves in the previous paragraph are metaphors for much else in life.

It's easy to forget the lessons of the waves. Religious thought seeks to teach us those lessons by reminding us that we are the clay, not the potter. But so much else in our culture whispers to us seductively that we can take control of this or be in charge of that.

And sometimes we can, in fact, exercise some control over situations and influence the course of history for good. Indeed, we should do that as often as we can.

But in the end the waves will have their way.

It is good to remember, however, that the waves can bring not only trouble. They also can bring gifts. Just now I found several small sea shells that are lovely in their oddly imperfect way. In fact, I have kept a still-together small black mussel shell (pictured here) and hope to get it back home in one piece to add to my modest collection of shells from, well, beaches all over the country and abroad.

The blond boys are wearing floaties to keep them safe, so they are beginning to learn that there are forces in the world against which they must be protected. My hope is that one day decades from now they'll be back on the beach here and watching other children playing in the water -- watching and hoping that those children, too, understand that it is not in their power to control all of life.

What role is religion playing in the political upheavals in Egypt? This NBC News piece gives some clue. And it reminds us that it's hard to find any news story anywhere in the world that doesn't have some thread of religion running through it.