A brief quiz: Who can name the Kansas City rabbi whose work was pivotal to accomplishing the goals of the Zionist movement to create a homeland for the world's Jews? 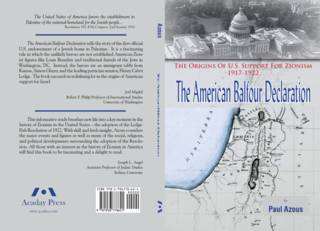 No, Eddie Jacobson, the influential friend who helped to convince President Harry S. Truman to recognize Israel's creation as a state in 1948, was not a rabbi. For the right answer you'll have to back up to the early 1920s.

I'd never heard of Rabbi Simon Glazer, either, until I just read Paul Azous' intriguing new book, The American Balfour Declaration: The Origins of U.S. Support for Zionism, 1917-1922.

Glazer, as this piece (accessed through the website of Beth Israel Abraham & Voliner congregation) lets us know, was an Orthodox rabbi in Kansas City in 1920-23. He helped to join several Orthodox congregations here together to become what was called the United Synagogues of Kansas City.

But Glazer, a native of Lithuania, as Azous writes in this fill-in-the-gaps history book, became a leader in the Zionist movement in the U.S. and helped to convince members of Congress to adopt a resolution supporting the idea of a Jewish homeland.

As World War I was ending, British authorities, prodded by the World Zionist Organization, produced the so-called "Balfour Declaration," which said that "His Majesty's government view with favor the establishment in Palestine of a national home for the Jewish people. . ."

But Jews around the world knew that was just a first step if Zionism was to reach its goal. They knew they needed the backing of the American government in some way. But most history books ignore the effort to achieve that backing. There tends to be a historical gap between the Balfour Declaration and the creation of Israel after World War II.

The Azous book describes all that it took -- and the pivotal role Rabbi Glazer played -- in achieving the 1922 "Palestine Lodge-Fish Resolution" in Congress, which declared that "the United States of America favors the establishment in Palestine of a national homeland for the Jewish people. .."

So I find it fascinating that Israel's history is so deeply tied to Kansas City through both Harry Truman and Rabbi Glazer. I wish I'd known about Glazer before I helped to lead a Jewish-Christian study tour to Israel last year. I think that information would have added to the trip.

Azous, by the way, is a Seattle businessman and writer who also wrote In the Plains of the Wilderness: Anthologies of Modern Jewish History. His Balfour book is a rework of research he did for a Ph.D. thesis.

Pope Francis, in remarks on board his plane from Brazil to Italy, did not, of course, change official church teaching on homosexuality. The church still declares it "objectively disordered." But by saying this -- "If a person is gay and seeks the Lord and has good will, who am I to judge that person?” -- he has set a welcome new tone. The question now will be how the church undoes its traditional anti-gay stance in official ways. My guess is that will take a lot longer.