Evidence that we live with the sometimes-odd and inappropriate decisions of our ancestors can be found on the American paper money you may carry around every day. 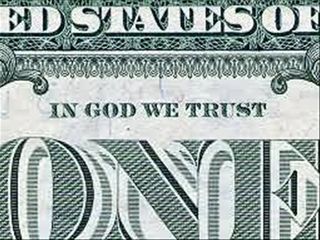 There you will see a phrase that tends to breach the constitutionally based wall of separation between church and state, "In God We Trust." (Church-state separation language is not specifically in the Constitution but its spirit is there and case law has established it.)

On this date in 1956, this phrase became our national motto when President Dwight D. Eisenhower, no religious fanatic, signed legislation making it so. (Pay attention to Ike's words at the site to which I've linked you.)

A couple of years earlier the phrase "under God" had been added to the Pledge of Allegiance.

Let's think about the mid-1950s. It was an era of deep engagement in the Cold War. Sen. Joseph McCarthy had been running around accusing everyone and his grandmother of being a communist, and, in fact, there were some pro-communist spies inside our government, though nothing on the scale that the demagogue McCarthy wanted people to believe.

The Iron Curtain, as Winston Churchill named it in a speech in Fulton, Mo., was in place, separating the Soviet Union and its satellites from what we overzealously called The Free World. And Americans were frightened of nuclear war, among other things.

So how did we confront "godless communism"? With God.

In the 1950s, America was a landslide for Protestantism, with perhaps three-quarters of Americans identifying themselves as some kind of Protestant. Today Protestants have slipped below the 50 percent mark. And the American religious landscape contains many more Muslims, Buddhists, Hindus, Sikhs, Jains, Zoroastrians, atheists and others.

But we've kept "under God" in the Pledge and "In God We Trust" on our money, despite court challenges. We've done this even though religious pollster George Barna says that Americans have so many different ideas about God that, in effect, we worship about 300 million different gods. So there's really no telling which god is meant in the Pledge on our our money.

Is it worth the inevitable fight it would take to remove that language to better respect the wall of church-state separation? Oh, I don't know. I think it would be better if we ditched that old language, but I also think there are lots of other more important matters worth our efforts, including economic justice, education, race relations, gun violence and on and on.

So solve all of those matters and then get back to me about "In God We Trust" and "under God." And once in awhile, you can start a pretty good conversation by getting out your money, pointing to the god wording and asking someone which god he or she thinks is meant there.

Peace talks between the Israelis and Palestinians have started again. And although optimism about the outcome seems in short supply, perhaps it would help diplomats on both sides to know that Americans and others from many faith traditions are praying for success and watching them closely so neither side gets away with obstructionism. If you want to let Secretary of State John F. Kerry know you are behind these talks, you can find an e-mail contact form here.

Truth, Grace, and Security, by Bruno Corduan. When I read in promotional material that this book was by a Christian who, as a youngster, wound up in the mandatory Hitler Youth organization and later even served for a time in the German navy in the Nazi era, I looked forward to seeing what insights such a person might bring to that dark, murderous time in human history. But the reader will get almost no sense in this book that any Holocaust ever happened. Instead, this is an oddly self-focused book in two parts. The first 68 pages are autobiographical. The rest of the book is the author's theology. Except for a brief mention or two of Nazi evil, there is essentially no acknowledgement from the author that while he was having this or that minor difficulty, his government was overseeing the murder of six million Jews and many others. Reading this must be what it would feel like to read a review of the play at Ford's Theater attended by Abraham and Mary Todd Lincoln that essentially ignored the assassination of the president. I was stunned. And although I'm sure the author is sincere about his Christian faith, much of the first part of the book comes across as self-congratulation for many, many things. There's also a pervasive claim here that God saved the author from one bad situation after another, though that claim will make readers wonder why God did not at the same time save six million Jews. You won't find any answer to that question here.