NORTH SPRINGFIELD, Vt. -- The room in which my wife's sister Leslie died almost a year ago is pretty much back to the way it looked before it became the place where cancer finally destroyed her. 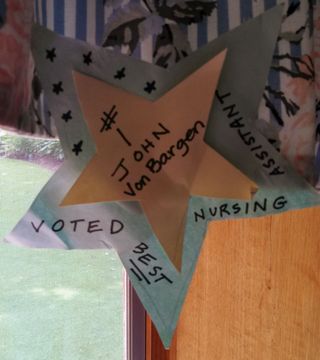 The rented hospital bed is gone as are all the tubes and machines that were keeping her out of pain.

But pinned to a corner of the valance over the window that looks out on the back yard is a hand-made paper star. This is what it says: "#1 John Von Bargen, Voted Best Nursing Assistant."

The husband of Leslie was with her throughout her 3.5-year ordeal, and in the end it was John -- even more than her physicians or the hospice nurses -- who took care of her. So the star doesn't lie. He was amazing, consistent, loving.

Every great religion teaches that life is precious. Some put more emphasis than others on the inestimable value of every human being, but all think of life as a gift to be cherished.

One way John mourns the death of his wife is to remember, through that little star, how he tried to take care of Leslie throughout her illness.

Some day, almost certainly, that star will come down and go into some file about Leslie. But for now it remains. And nobody has any right to tell John it's time to remove it and move on. That's for him only to say.

It's not that people don't sometimes get stuck in grief in unhealthy ways. They do. And it's not that they never need help getting unstuck. They do sometimes.

But the pastoral thing to do is always give people wide latitude when it comes to bereavement. Their loss, after all, is not yours in the same way that it's theirs.

A PREACHER LOSES IT

When pastors run amok, especially in the pulpit, the results can be horrifying. Exhibit A is this YouTube video of a Baptist preacher insulting members of his own congregation. Warning: It's a train wreck from which you'll find it difficult to look away.