Like many people around the world in recent days, lots of Americans have been all ga-ga over the birth of a royal baby in England. 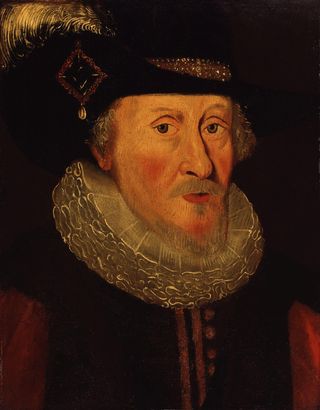 This is a boy who, I suggested on Facebook, should be named Prince so that one day, if things go well, he can change it to King, The Ruler Formerly Known as Prince.

But, of course, Will and Kate ignored my good idea and went with George Alexander Louis Partridge Pear Tree. Or close to that.

I bring all of this up today because this is the anniversary of a royal happening in England about which at least some people of faith might care. It was on this date in 1603 that King James VI of Scotland became King James I of England (depicted here).

Yes, this is the same King James after whom the 1611 authorized version of the Bible is named, the King James Version.

I don't know why, but it tickles me to think that for more than 400 years now we might, under other circumstances, have been reading the King Ralph or King Bob version. But let it go.

What I had forgotten about until I did a bit of reading for this post is that young King Jim VI of Scotland was born in 1566 but became Scotland's king in 1567. You think you have attitude problems with your kids? How would you like to have to call your toddler "Your Majesty"? 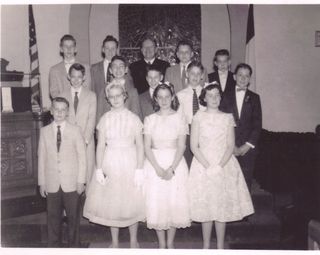 I own several King James Version Bibles, including the one I received when I was confirmed as a member of a Presbyterian congregation in 1958. (Can you find me in this photo on confirmation Sunday? Far left, middle row.) And, of course, it's hard to beat the soaring and poetic language of the KJV, though that Elizabethan-era language also means that some of the KJV is nearly incomprehensible to modern ears. Well, so is good and proper contemporary English, but that's another story.

AND IT'S STILL WRONG

The head of the Russian Orthodox Church says same-sex marriage is leading humanity to doomsday. Which is just what some American white political leaders said 150-plus years ago would happen if slavery ended and blacks were considered equal to whites. Imagine that.