Usually I write columns, not paint them. But as you can see in the photo here today, on Saturday I was part of a team from my congregation that repainted parts of the girls locker room at Southwest Early College Campus (SWECC) in the Brookside area of Kansas City. 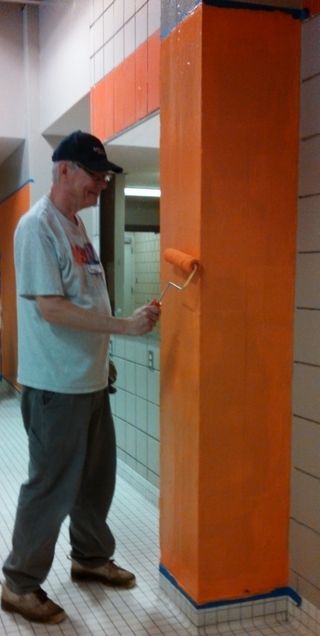 Why would folks from a church show up to help put a public school in better physical shape? Not a bad question. It's one that Joe Robertson of The Kansas City Star got at a bit in his Sunday story about our work.

But first let's be clear that my congregation is only one of eight that make up the SWECC Faith-based Coalition, which works closely with the administration and faculty of SWECC to help in various ways, including assisting students with special projects and supporting teachers in various ways.

And on Saturday the SWECC coalition was joined by students and others in the community.

Well, our faith calls us to be good neighbors. For more on that, you might want to reread the parable of the Good Samaritan in Luke 10. Part of what being a good neighbor means is being concerned about the institutions that help to make up the social fabric of our community.

Southwest High once was one of the great high schools not just in the city but in the country. Then, along with much of the Kansas City School District, it ran into various kinds of trouble until, finally, a few years ago, it became the scene of chaos and disruption. It's hard to learn in such an atmosphere, so students were suffering.

Area churches began to come together to see how they might help. They began working with the new, effective principal, Dr. Ed Richardson, and others at the school. And students are beginning to notice that people of faith seem to care about what happens to them and to their school.

I'm not a great painter. As I say, I'm more used to dealing with written columns than painted ones. But that really doesn't matter. What matters is that when students return to class in a few weeks they'll see a school with new paint in various places -- paint including the orange and black that are the school's own spirit colors.

And maybe they'll feel good about being there and about the fact that someone cared enough to make things look better. And maybe they'll dedicate themselves to learn. The whole community will be better off as a result.

ARE THESE CARDINAL SINS?

Missouri continues to amaze us. It turns out that a new look at the question of which is the most sinful city in the U.S. finds it's not Las Vegas but St. Louis. We Kansas Citians think that seems like just the right finding for an Arch enemy.