As we approach the 500th anniversary (Oct. 31, 1517) of the start of the Protestant Reformation, let's remember that 500 years before that there was another major break in Christianity. 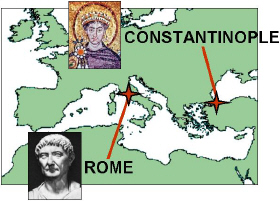 On this date in 1054, the so-called "Great Schism" separated Roman Catholicism from Eastern Orthodoxy. In was on July 16, 1054, that the leaders of what were known then as the Roman and Greek Catholic churches excommunicated each other.

This bitter schism -- a terrible model for the rest of the religious world -- lasted officially until Dec. 7, 1965, when Pope Paul VI and Eastern Orthodox Patriarch Athenagorus I met to declare an end and express the hope for eventual reunification. Since then some steps toward that have been taken but the Roman and Eastern churches still are separate.

But at least those two churches haven't atomized in the way that the Protestant world has, with hundreds of different churches, some friendly with one another, some quite hostile.

For me, July 16 is a happier historical date in that my congregation, Second Presbyterian Church, was founded on this date in 1865, meaning we're just two years away from celebrating our 150th anniversary.

Good for Fuller Theological Seminary in California for sanctioning an LGBT student group as part of the family of that evangelical institution. Fuller is an intriguing multi-denominational place that over the years has surprised people now and then with its broader views of things while keeping its reputation for evangelicalism.