For Father's Day this year one of our kids found for me a bound volume containing two months' worth of 1913 Kansas City Journal newspapers. 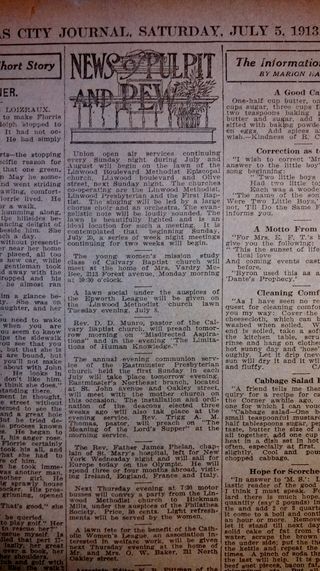 The Journal, started in 1854, later became the Journal-Post and still later just the Journal again before dying in 1942, leaving The Kansas City Star as the city's only newspaper (with the morning KC Times, which The Star owned. The Times was folded into The Star in 1990 and The Star became a morning paper only).

Because I write about religion, I was curious to see how that newspaper covered faith matters 100 years ago -- indeed exactly 100 years ago. The two months in the collection start in early July 1913.

It did not surprise me to find that the long history of newspapers providing inadequate religion coverage could be found in the Journal 100 years ago.

On Saturdays, when The Star now publishes a truncated Faith section, the Journal offered only a column or column and a half labeled "News of Pulpit and Pew."

The July 5, 1913, edition carried 14 items under that title while the July 12 issue contained 27 items, all brief notes, mostly about who was speaking at which church or what special event was happening in which parish.

For instance, on the first page of the second section of the July 6 Journal there's a story about a dispute within the local Mormon community.

And under the headline "Church row ends fatally" there is a story from Tahlequah, Okla., about an argument over management of a Sunday school there that ended in the shooting of a man and the stabbing of another.

Perhaps the most fascinating bit of alleged religion reporting I saw was part of a long series about the Philippines. As you may know, U.S. troops were in the Philippines starting in 1899 to suppress a terrible guerrilla uprising.

At any rate, here is how the piece about the Catholic Church in the Philippines begins:

"The Catholic Church gave the Filipinos the inestimable boon of Christianity. It lifted them from idolatry and rescued them from Mohammedanism."

I'm thinking that breath-takingly witless lead today would have a tough time getting by an editor. At least I hope so.

MUSLIMS STRUGGLE WITH THIS, TOO

Ramadan, an important Islamic month of fasting and praying, can be lonely for new converts, it's reported. Integrating newcomers into any faith community can be challenging, and in my experience most groups do it poorly.