Home Archives Profile
Is there purpose to suffering? 6-4-13
Earth laughs in flowers: 6-6-13

VANCOUVER, B.C. -- Every religious tradition, it seems, has a creation story. Well, Jews and Christians actually have two creation stories in the book of Genesis, but not everybody gets that or understands that those two separate stories stand in a bit of tension with one another. But that's a topic for another day. 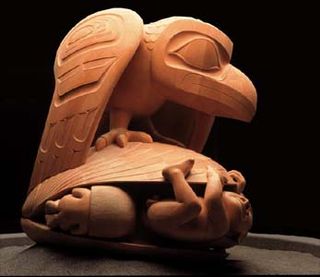 Here at the Museum of Anthropology of the University of British Columbia there is a marvelous wooden sculpture that is an interpretation of part of the creation story of the Haida people, an indigenous Indian nation located in the Pacific Northwest. (The photo here today shows it.)

That creation story starts with a raven, and you can read about how the raven brought light to the world here.

Then, according to Haida legend, the raven discovered humans in a clamshell on a beach at Rose Spit on the Queen Charlotte Islands in British Columbia.

That's the story you see brought to artistic life in this sculpture by Bill Reid. You can read about the production of that sculpture here. But here's a crucial summary of what the raven found:

"According to Haida legend, the Raven found himself alone one day on Rose Spit beach, on Haida Gwaii. Suddenly, he saw an extraordinary clamshell at his feet, and protruding from it were a number of small creatures. The Raven coaxed them to leave the shell to join him in his wonderful world. Some were hesitant at first, but eventually, overcome by curiosity, they emerged from the partly open clamshell to become the first Haida."

The story is, of course, preposterous to literalistic 21st Century minds marinated in the scientific method, which is one reason it's so appealing. It is myth, parable, legend, and its mystical character is in harmony with creation stories found in most religions, including Christianity and Judaism. Humans, after all, weren't around when, as Genesis says, the spirit of God brooded over the chaos and declared, "Let there be light."

So let's celebrate our many creation stories, even as we recognize that even those contained in what many of us regard as holy writ, cannot be understood literally. But they can be rendered in fascinating art.

IF I QUIP WITH THE TONGUE OF MEN AND ANGELS. . .

Pope Francis has a gift of speaking simply, but his quotes for a Twitter age may have a downside, this piece suggests. Sometimes a short quote or quip hides nuance and complexity that must be considered for a full understanding. Or as I like to say: Bumper sticker theology is for cars.