Houston -- Theodicy, meaning answers to the question of why there is evil and suffering in the world if God is good, is the open wound of religion. 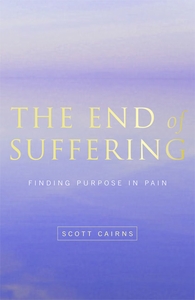 And yet people continue to explore the question of suffering, and it's good that they do. For one thing, it's a constant reminder of the contingent nature of life. And it keeps us humble. Or should.

Recently a friend gave me a 2009 book, The End of Suffering: Finding Purpose in Pain, by Scott Cairns, who teaches English at my alma mater, the University of Missouri in Columbia. I finished reading it here in the Houston airport while heading to British Columbia for a week.

Cairns is an Orthodox Christian, and his essay (115 pages) on the subject is marinated in the mysteries and insights of Orthodoxy. I don't recommend this book to non-Christians, even though everyone may appreciate the fine writing of this man, who also is a poet. A small example: "Oblivious as fatted cattle munching a numbing cud, we are likely to squander an inestimable gift, unawares."

My suggestion that this is a book for Christians has to do with Cairns' deep attention to what is meant by the "body of Christ" and to how individual Christians are part of that mystical body.

Cairns has awakened to -- and awakens us to -- the profound ways in which we are connected. In many ways, he is in harmony with what's known in southern Africa as Ubuntu Theology, or philosophy, which proposes that none of us can be well if any of us is sick. "I am," say Ubuntu's adherents, "because we are."

The inevitablility of human suffering raises the question of whether it has a divine purpose (or end, which is how the word "end" is used in the book's title) or whether in some sense it at least can be thought of as redemptive.

What Cairns urges us to remember is that there is nothing God does that is not redemptive. God's purpose is to redeem the whole creation. So every suffering, though not caused directly by God, can become redemptive if it puts us in deeper touch with the body of Christ, with the whole of humanity. And in that suffering, says Cairns, Christ joins himself to us -- which is what atonement (at-one-ment) means.

As to whether God purposefully causes suffering, as some bad theology suggests, Cairns writes this: ". . .if the innocent suffer, they do so because one of us -- you or me or some other thing -- now or in the past, has set their pain in motion."

Similarly, he quotes the character Elder Zosimas in The Brothers Karamazov as saying, "For if I myself were righteous, perhaps there would be no criminal standing before me now."

The human condition, indeed, is infused with suffering. And, as Cairns notes, "Every choice in our lives that separates us from communion with God, and every decision that clouds our awareness of His presence or erodes our relationships with one another has a profound and expanding effect -- as the proverbial ripple in a pool."

So there is a certain existential sadness to human life because of suffering and pain, but when we can use it to connect not just to each other but also to God, who uses everything -- good and evil -- to redeem us and the cosmos, we can find the strength to bear what comes our way.

ON A SLIPPERY SLOPE?

A new poll suggests most Americans think religion is losing its influence in society. This development has lots of ramifications, and I intend to dig into some of them in a later blog posting. But for today I just wanted you to be aware of the findings.