Today I commemorate the great Pope John XXIII (pictured here) on the 50th anniversary of his death, June 3, 1963, which was just a few days before I graduated from high school. 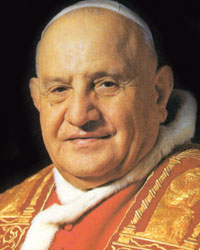 It was an electric, shimmering time here and abroad. It was the age of Camelot, with JFK in the White House, ultimately accomplishing not much and behaving in immoral ways in his personal life, but infusing the country with a spirit of youth and hope.

The American Civil Rights Movement was rolling, and in the end nothing would be the same.

John XXIII came to the papacy at age 76 in 1958 without much fanfare and certainly without much in the way of expectations, given his age.

But he soon proved to be full of zip and ideas, and he announced a global ecumencical conference that became known as Vatican II, or the Second Vatican Council. It did nothing less than breathe needed new life into the Roman Catholic Church and to capture the imagination of Christians around the world as the Vatican sought to understand and adapt to modernity.

Today there are forces at work against the reforms of Vatican II, and that anti-reformation movement has gained strength in various ways. But the church and the world both continue to remember the promise of what can happen when an institution is willing to open itself up to renewal.

My suspicion is that John XXIII would feel in more harmony with Pope Francis than with either of his two predecessors, Benedict XVI or John Paul II. And that he would remind Francis that he has a relatively short time to lead the church into a brighter future.

Perhaps Francis today is listening to the spirit of the man born Angelo Giuseppe Rancalli on Nov.25, 1881. It would be good for the church if he were.

Here's a good piece about why a Methodist minister doesn't stand up at big league baseball parks when "God Bless America" is sung. Who's with him?