Jim Atwood is a gun owner, a hunter, a Presbyterian minister and a theologian who understands idolatry. 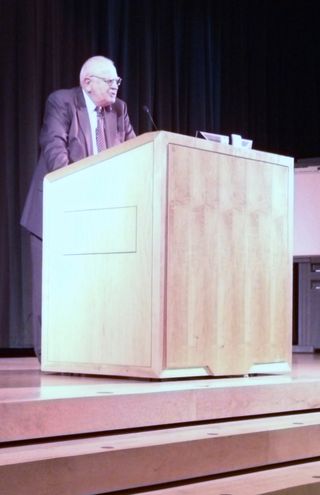 And he's convinced that many of America's gun owners have moved from respect for firearms to idolatry of them.

Atwood (pictured here) was in Kansas City last week to make his case in several venues. He spoke Thursday evening at the Kansas City Public Library's Plaza branch, where he also signed copies of his persuasive book, America and Its Guns: A Theological Exposé. Then he spoke to an adult education class and preached Sunday at my congregation, Second Presbyterian Church. You can listen to his sermon here.

Atwood is currently chairman of "Heeding God's Call of Greater Washington (D.C.)," an ecumenical group working against gun violence, which he described in his Thursday talk as "America's greatest spiritual, ethical and moral issue."

The causes of gun violence, he said, are many, but "we have a profound problem with gun violence because far too many owners have moved from respect to reverence -- reverencing their weapons. . .For masses of Americans, guns have become idols. It would be outlandish for me to say that every gun is an idol, that every gun owner is an idolator." But, he said, it's clear that such aggressive gun advocates as the leadership of the National Rifle Association have shown that they believe gun ownership is somehow sacred and that guns must be reverenced.

The result, he said, is the "idolatrous belief that guns can produce security."

Atwood said one reason the nation has failed to curb gun violence is that people of faith in the U.S. have failed to step up and take leadership: "The faith community has been asleep -- sound asleep."

But since the shootings last December at Sandy Hook Elementary School in Newtown, Conn., "we are seeing a tipping point where the faith community is at last waking up."

I have never owned a gun and doubt I ever will, though I believe gun ownership should continue to be legal but much better regulated than now. And I think Atwood is right about the fact that if people of faith in this country really got behind sane gun laws, our politicians would stand up to the gun zealots, whose policies promote death, not life.

A NEW U.S. AMBASSADOR TO THE VATICAN

President Obama has named a new ambassador to the Vatican, and this analysis suggests his choice is a good one. Yes, and who wouldn't like to spend some time in fascinating Rome?