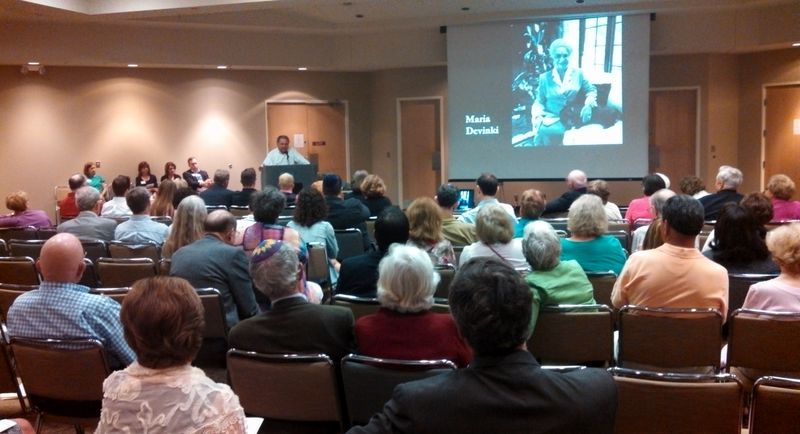 One of the many reasons I'm glad my co-author, Rabbi Jacques Cukierkorn, and I wrote our book, They Were Just People: Stories of Rescue in Poland During the Holocaust, when we did (2009) is that almost every day the number of survivors shrinks as that generation dies off.

And that second generation is stepping up to the plate to make sure their parents' stories aren't lost and that the world remembers what this German-led genocide looked like.

One evening this past week, for instance, four adult children of Holocaust survivors told some of the stories they tell when they go out as speakers on behalf of the Midwest Center for Holocaust Education, which for the last 20 years has sought to educate youth and adults about the causes and details of the genocide of six million Jews. Until a few years ago, the speakers were survivors themselves. But now that task has fallen to their children and grandchildren.

I'll focus just a bit on one of them, Sam Devinki, the son of survivors Fred and Maria Devinki, now both gone. Jacques and I tell Maria's story in our book. But with Maria now gone, it's up to Sam's generation and the succeeding generations to be memory bearers. (You see Sam speaking at the event in the photo here today; an image of Maria is on the screen.)

As I say, you can read Maria's story in our book, but here are a couple of things Sam told the group and that he tells youth to whom he speaks:

* Soon after the Nazis invaded Poland in September 1939, some 30 members of Sam's family were hiding in a relative's large basement, which usually was a grain storage area. "Two soldiers -- just two soldiers -- took those 30 people out plus 50 other people, a total of 80 people, marched them out to the cemetery and executed them." Sam's father, whose mother was among those murdered that day, later bemoaned the fact that those being marched to their death didn't stop those soldiers. (For my recent review of a new book about Jewish resistance, click here.)

* When the Nazis entered Germany, they knew that people who had served in the Polish army in World War I were about the only Poles familiar with guns, "so those were the first people they took. Unfortunately one of those first people was my grandfather, who had served in World War I in the Polish army. He was taken to Treblinka, and as most of you know, Treblinka was strictly a killing field. When you got to Treblinka, in 36 or 48 hours you were dead."

It's inevitable that as time goes on there will be some parts of the survivors' stories that will receive less and less emphasis and eventually will disappear. But the task at hand is to delay that day as long as possible so that each new generation will grasp the horror of the Holocaust and can try to imagine ways to prevent something like it from ever happening again. The second (and in some cases third) generation is showing evidence that its members understand that obligation.

How is Pope Francis doing as he nears the first 100 days of his papacy? Quite well, this Religion News Service analysis suggests. In fact, I don't remember as much enthusiasm for a pope since John XXIII.