Members of particular groups usually know best the characteristics, foibles, eccentricities and tendencies of others in the same group. 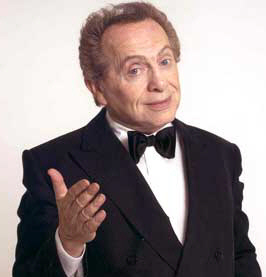 And we all know that there are inside-baseball jokes about groups that are acceptable among group members but are out of bounds when told by non-members.

This is especially true of nuclear families and of faith communities. I am free to argue with one of my sisters and call her an idiot or worse, but I better not hear you putting her down. Right?

And as a Presbyterian I can joke about us being the "frozen chosen" or about how the formal uniform of Presbyterian males is a navy blue suit. But people outside would do best to focus on their own groups and not on us Presbys.

All of which is a way of introducing this fascinating piece about the still-kicking comedian Jackie Mason (pictured here), a rabbi who has made a wonderful career doing humor for and about Jews, but humor that lots of others also have come to appreciate. Indeed, in the piece Mason says this: "And it’s not true that my act is about Judaism. It sounds like Judaism, but my act is about all kinds of people, but because I sound so Jewish, people are too stupid to separate the sound from the substance."

For instance, he says that things have changed so much that "The only anti-Semitism that I suffer from today is from Jews." As a non-Jew, I have no way of evaluating that statement, though I have heard other Jewish friends say something similar.

Mason also talks about "the obsession with luxuries that some Jews have." I want to argue with him that this is far from unique to Jews, but I'd learn more if I kept quiet and listened to what he had to say: "Jewish people very often buy a thing for 10 times the money that everybody else thinks it’s worth. They can’t even figure out why they bought it. But because it’s expensive they’re anxious to pay for it to prove to themselves they can afford it and prove to you that they can buy it. That tells you more about a person’s personality than a hundred books. This is the way they achieve respect."

Is Mason engaging in what some Jews call self-loathing? I don't think so. Rather, I think he's simply looking for subjects for his comedy. But if I were to say the things Mason said about "the obsession with luxuries that some Jews have," I would correctly be open to the charge of stereotyping and antisemitic thinking.

Similarly, I heard a Mormon comedian in Utah once say as part of his act that the Mormon gene pool could use some chlorine. He could make that joke as a Mormon. A non-Mormon should never try it.

But Garrison Keilor, a Christian, can make fun of Lutherans because he is a Christian, while Mason can critique Jewish life as a Jew. Both, of course, may be wrong in their conclusions, but civil discourse and essential human dignity requires that we leave such critiques to members of the group being examined.

The people who produced "The Bible" series on the History Channel plan a follow-up, they say. As someone who was underwhelmed by the first series, I will have the patience to wait for the second.