One of the gifts religion has given the world or at least helped to affirm and nurture is ritual. Yes, there's empty, meaningless ritual. But ritual also can be profoundly healing. 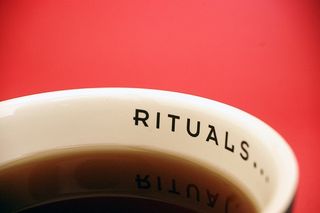 (The book to read is Caring Liturgies: The Pastoral Power of Christian Ritual, by Susan Marie Smith. The fact that I helped Susan edit the book should not deter you. It's a fine read)

Some faith traditions rely on ritual more than others, but all of them employ it in some way or other and by doing that they help to teach its efficacy in even non-religious situations.

Recently, Scientific American offered readers this thoughtful piece called "Why Rituals Work: There Are Real Benefits to Rituals, Religious or Otherwise." Here's a key in the article:

"Recent research suggests that rituals may be more rational than they appear. Why? Because even simple rituals can be extremely effective. Rituals performed after experiencing losses – from loved ones to lotteries – do alleviate grief, and rituals performed before high-pressure tasks – like singing in public – do in fact reduce anxiety and increase people’s confidence."

It's kind of fun to watch for rituals as you wander through the day. I especially like to pay attention to rituals that athletes use. Watch a batter prepare to step up to the plate in baseball, for instance. Often he will go through the very same motions each time.

Rituals can offer a sense of stability and routine in a world full of uncertainty. It's more than just a crutch. It's a way of giving people at least a small sense of control and focus. And in many religious rituals, the point has to do with connecting the finite to the infinite and the ordinary to awe and wonder.

Which strikes me as a perfectly good thing to want to do.

RELIGION STATS IN THE U.K.

Friday here on the blog I wrote about religious statistics. To follow up that discussion, new figures for religious affiliation in the United Kingdom have just been released. Have a look. Lots of interesting stuff there as what once was an area dominated by Christianity now is going more pluralistic.