One of the persistent myths about the Holocaust is that Jews did not resist, giving in like sheep to the slaughter that was led by Hitler's murderous vision of the end of European Jewry. 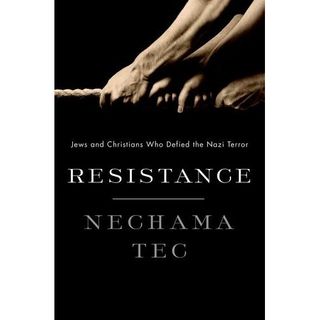 It's hard to know where to begin to analyze history to see how much truth there might be in the myth and how much of it is simply wrong. One place to start, perhaps, are with those Jews who managed to find non-Jews to hide or in other ways help them survive. You can read 20 or so stories of such survivors and the families who helped them in a book I wrote with Rabbi Jacques Cukierkorn, They Were Just People: Stories of Rescue in Poland During the Holocaust. Surely that was an example of resistence.

Another reality to consider is how completely unbelievable in the 1930s was the idea that any government could adopt as a goal the elimination of an entire people merely for being who they were. Thus, though Jews may have expected discrimination and oppression, it was hard to believe that they all would be targets to be exterminated. So instead of fleeing at the election of Hitler in 1933, they waited, hoping things wouldn't be so bad.

But Jewish resistance is much more complicated than all that and, in fact, much more common than the relatively small number of Jews who managed to slip away from Hitler's death machine with non-Jewish help.

Some scholars have looked at this matter in the course of writing about the Holocaust as a whole, but now Nechama Tec focuses entirely on the subject in her new book: Resistance: Christians and Jews Who Defied the Nazis Terror.

It's an important and necessary book. And, what's more, it's written not for already-in-the-know scholars but for anyone and everyone, including those just beginning to learn about the horror that was the Holocaust, or Shoah.

Tec, an emerita professor at the University of Connecticut and author of several other Holocaust-related books, tells the story of resistance not just from a 30,000-foot level but also from an on-the-ground level with stories of actual resisters based on interviews with some of them. And she puts all of this in perspective by reporting that German oppression and violence "was met by three distinct reactions: submission, resistance, and collaboration." Her new book, obviously, focuses on the second of those.

She wants readers to know that "resistance is more than not submitting -- it is active and requires taking action, and that means cooperation with others." You might have an individual resilient spirit, but to resist something as massive and deadly as Hitler's "Final Solution" required people to work together. And even then, of course, two-thirds of Europe's Jews died anyway.

One of the things that makes this book so helpful is that as it seeks to understand resistance and the widespread myth that not much of it happened, it also offers a broad outline of how the Holocaust itself came about and played out. And, as our own They Were Just People book does, it asks readers to think about what they might do if faced with life-and-death questions. And although we'll never know how we'd react in any given situation, the more we can think through our options before a crisis happens the better we might be prepared to do the right thing.

WHAT MAKES THE WORLD WORTH IT

A Catholic publication reviewing "The Great Gatsby" movie concludes that the world is an empty place without faith. Theists, atheists, discuss. But with civility, please.