Perhaps it's because I wrote a daily humor column for nearly three decades for The Kansas City Star that I have a special appreciation for humor in almost any circumstance -- including in worship. 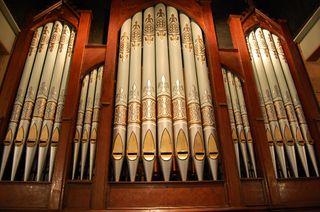 It's why once a month or so here on the blog I give you a day of faith-based jokes. It's why I always hope whoever is preaching when I'm at worship throws in a bit of humor.

And I'm not alone among people of faith in appreciating humor. Heck, the Qur'an says that God "causes laughing." (53:43)

Which is why I'm linking you today to this funny story from England about church organists who get revenge against certain pastors by slipping into their music unexpected songs, especially ones with some not-so-hidden meanings.

Perhaps my favorite mentioned in the piece has to do with an organist in Scotland who was on the outs with the church elders but got back at them one Sunday when they all processed down the aisle to start the service. The organist played "Send in the Clowns."

My oldest sister is a pipe organist and played for many years at a church in the Bay Area. Today she still teaches music and plays for weddings at the chapel at Mills College. She's told some funny stories of what happens at weddings sometimes but I've never heard her confess to slipping in a bit of revenge music. But you can't bet I'm going to ask her now.

IS THAT REALLY WHAT HE MEANT?

If you're the pope, part of your job is to maintain church traditions. But as you do that, you might want to be careful about quoting former popes. For instance, Pope Francis, speaking the other day to nuns, quoted Pope Paul VI this way: “It’s an absurd dichotomy to think one can live with Jesus, but without the Church, to follow Jesus outside the Church, to love Jesus and not the Church.” It's almost a dead certainty that when Paul VI said that he was referring specifically and only to the Roman Catholic Church. And certainly there are Catholic leaders who believe Paul's message today. But in an age of better ecumenical and interfaith relations, that kind of message doesn't go down very well with Protestants, the Orthodox and other Christians outside of Catholicism.